LiDAR, which stands for Light Detection and Ranging, is a sensing method that uses light to measure the range from a known object to an unknown object.

Volvo will be partnering with Luminar for LiDAR and perception technology on the next generation of their cars, starting with the 2022 XC90. The partnership is set to yield the first fully self-driving technology for highways, called Highway Pilot, and paves the way for future active safety developments, according to a release. There are currently no self-driving cars on the market.

According to a release, "Luminar's technology is based on its high performance LiDAR sensors, which emit millions of pulses of laser light to accurately detect where objects are by scanning the environment in 3D, creating a temporary, real-time map without requiring internet connectivity."

The LiDAR tech will be integrated into the roof of the next-gen XC90, seen here.Photo courtesy of Volvo Cars

Volvo's next-gen SPA 2 vehicle architecture is said to be hardware-ready for autonomous driving starting in 2022, with Luminar LiDAR seamlessly integrated into the roof of the vehicle.

Buyers who opt for Highway Pilot on their vehicles will have the technology activated via an over-the-air (OTA) update. It will only be activated once the vehicle has determined it is safe via geographic locations and conditions. Volvo has not specified which highways they are designating as safe.

As described by Volvo, "To enable the Highway Pilot feature, Luminar's perception technology will be combined with autonomous drive software and the cameras, radars and back-up systems for functions such as steering, braking and battery power installed on forthcoming Volvo cars equipped for self-driving. Put together, this gives Volvo users who want it access to a safe, fully self-driving feature for use on highways."

"Soon, your Volvo will be able to drive autonomously on highways when the car determines it is safe to do so," said Henrik Green, Chief Technology Officer, Volvo Cars. "At that point, your Volvo takes responsibility for the driving and you can relax, take your eyes off the road and your hands off the wheel. Over time, updates over the air will expand the areas in which the car can drive itself. For us, a safe introduction of autonomy is a gradual introduction."

Volvo has been testing self-driving technology in vehicles for years, including trials near its headquarters in Sweden. Its in-house Drive Me program was designed to be suitable for families that were given special training.

The partnership between Luminar and Volvo also extends to exploring LiDAR's role in improving future advanced driver assistance systems (ADAS), with the potential for equipping all future SPA 2-based cars with a LiDAR sensor as standard. This means that everything from the S90 to the XC40 could get the tech as well.

ADAS isn't as easy to scale up or down as cruise control. Because of the variety of vehicle angles and sight lines, each model requires its own tuned engineering from multiple angles. However, each vehicle may use the same hardware and software.

As part of the agreement, Volvo Cars has also signed an agreement to possibly increase its minority stake in Silicon Valley-based Luminar.

The next-gen 2021 Mercedes-Benz E-Class will come with the latest iteration of MBUX (Mercedes-Benz User Experience) infotainment system. The 2021 E-Class Coupe and Cabriolet will be the best-networked cars in the Mercedes-Benz and Mercedes-AMG passenger-car portfolio.

Here's what you need to know.

The system includes two large screens, side by side.

The MBUX display includes two 12.3-inch screens that are contained under one piece of glass that spans from in front of the driver to the center of the dashboard. These screens are where the instrument cluster is shown and where technology, like Apple CarPlay and Android Auto, are displayed. 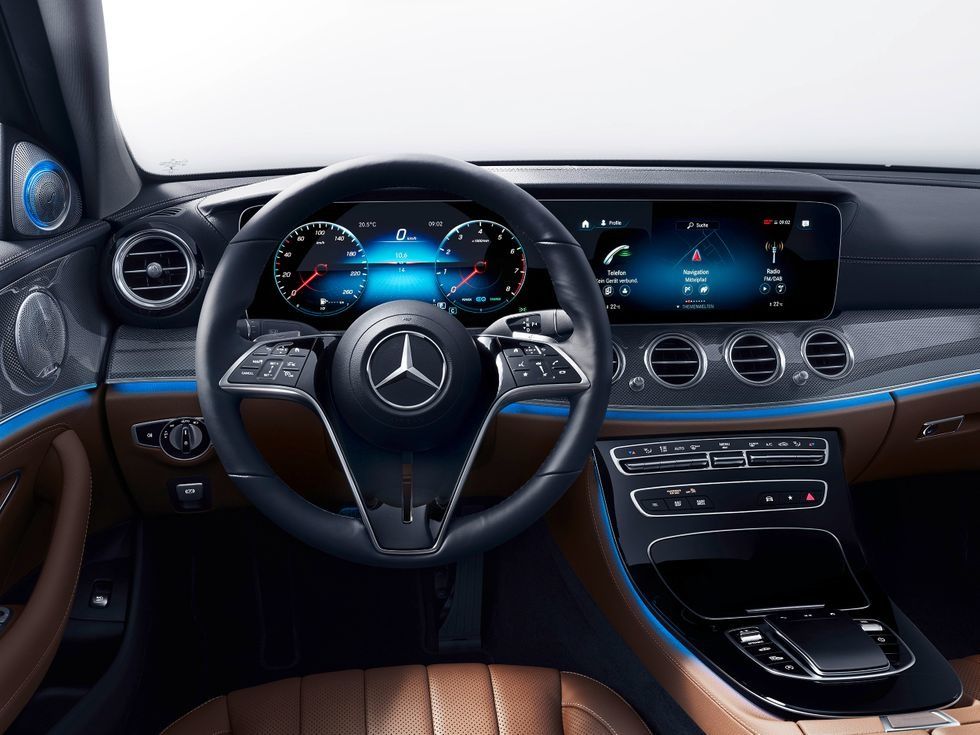 The system is designed to continuously learn. Are you an Atlanta Braves fan? You can can learn that and prompt you to turn on the radio to the station where the game is playing when it begins.

The MBUX is able to perform a number of weather-related functions, utilizing the voice assist to read the forecast to the driver. The car can even tell you what the snow report is for your favorite ski area.

It can recognize your movements.

The MBUX Interior Assistant recognizes movement. When a hand is approaching a touch screen or the center console touch pad, the system is triggered to change the display and highlight elements. This is similar to a computer mouse hovering over a button on a webpage and the button slightly changes its appearance to let the user know that it is selected.

"These include, for example, the visualization of the driving programs and telemetry data on the touchscreen multimedia display. In the instrument cluster, the driver can switch between three distinct display styles including "Supersport" mode, which is particularly striking, with a central, round tachometer and perspective horizontal displays to the left and right of the tachometer, creating an impression of depth. In addition, various special displays such as engine data, gear indicator, warm-up, setup, G-meter and race timer can be selected via the AMG menu."

The MBUX system interacts with the new Mercedes steering wheel. 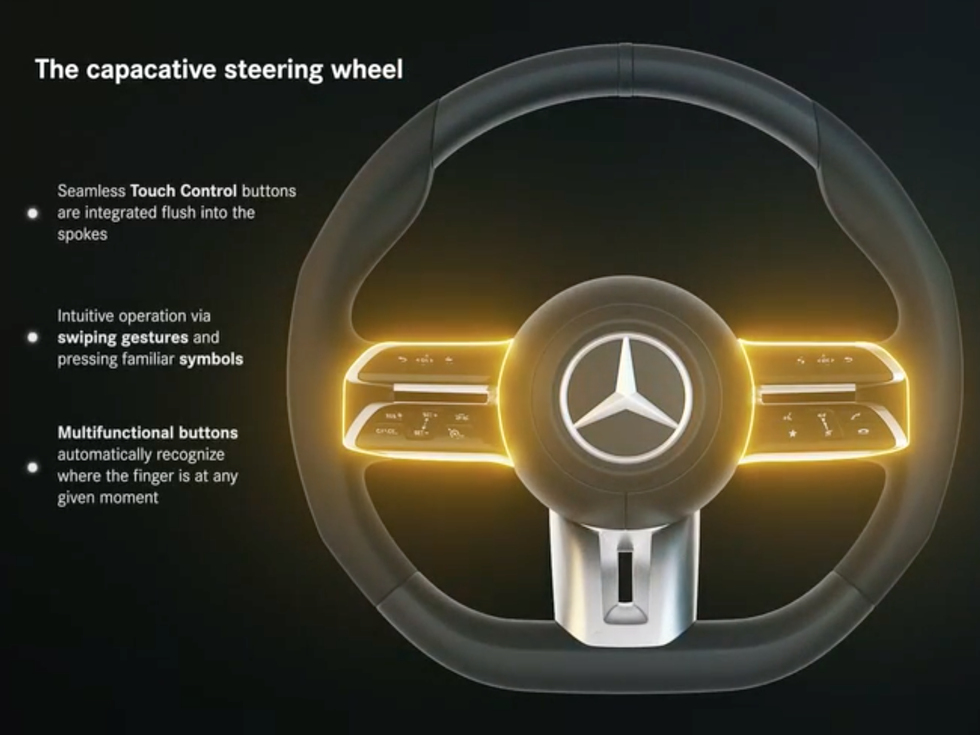 The automaker has redesigned its steering wheel to include capacitive sensor technology. With this technology, some functions will operate similar to how your smartphone operates.

Nissan has been assisting clients throughout the coronavirus pandemic.

The free trial was originally offered for a six-month period. It includes safety and security services as well as Automatic Crash Notification, Emergency Call, Connection to Roadside Assistance, and a number of remote services that can be used on the NissanConnect Services mobile app.

Drivers can access NissanConnect Services in a variety of ways.Photo courtesy of Nissan North America

"As people deal with uncertainty and change in the world, we want to give owners support and peace of mind," said Dan Teeter, director, Vehicle Connected Services, Nissan North America, Inc. "Our hope is to bring some much-needed comfort to our customers with this NissanConnect Services trial extension."

Nissan Concierge is also offered for owners of the 2019 Nissan Altima Edition One and 2020 Nissan Titan. The service provides live, 24-hour access to a professionally trained concierge team available to assist owners with a variety of everyday tasks.

While most of the country has been self-isolating during the COVID-19 pandemic, Nissan Concierge has been assisting clients with a variety of tasks including finding testing stations, identifying modified grocery store hours, assisting with new home workout routines, and finding activities for children, among other tasks.

As the country's businesses begin to open up, Nissan Concierge can help you order takeout from your favorite restaurant, find out which parks and pools are open, and assist with identifying accommodations during your spot of the moment road trip.

The service can be accessed in equipped Nissan vehicles, or while owners are at home by using the NissanConnect Services app for smartphone, smartwatch or voice assistant. Nissan Concierge will be offered on several additional Nissan models for the 2021 model year.

Customers eligible for this offer have been contacted via email and informed that the extension can be activated through June 30.

For additional information on how Nissan is assisting current and future owners, dealers and employees during this challenging time, please visit nissanusa.com/coronavirus.