Toyota confirms it's moving Tacoma truck production out of Texas

Toyota is moving proaction of the Tacoma across the border.

American writer Carl Sandburg once said, "Texas is a blend of valor and swagger." What Texas no longer will be is the home of the Toyota Tacoma. Toyota has confirmed that it's moving production of the midsize truck acres the border.

The Japanese automaker is in the midst of a shift as its switches its Indiana plant to midsize SUV and minivan production by 2022. That will move production of the Toyota Sequoia to San Antonio, currently home of the Tacoma and Toyota Tundra. Tacoma production at Toyota Motor Manufacturing Texas will end by late 2021. 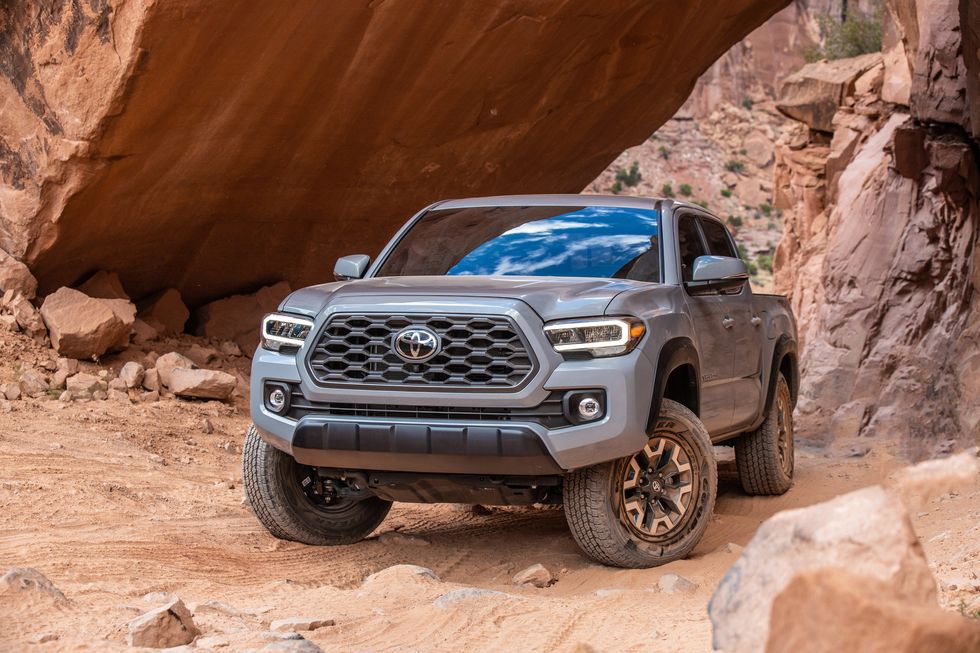 The Tacoma is the fourth best-selling pickup truck in the U.S.Photo courtesy of Toyota Motor Sales, U.S.A., Inc.

Toyota is already producing some Tacoma models in Mexico. Its Baja California plant has been rolling them off the line since 2004 and last month the Guanajuato plant began assembly of the truck.

Toyota says that no U.S. jobs will be impacted by the shift.

With the enacting of United States–Mexico–Canada Agreement (USMCA), automakers will be able to manufacturer vehicles in Mexico without incurring harsh penalties.

The Toyota Tundra is also up for a redesign. It is expected that the Tundra will debut in the next year and share a frame with a redesigned Sequoia. Toyota's move allows those models to be produced at the same plant. The Sienna, Toyota's minivan, is also expected to be redesigned soon. There have been indications that Toyota is looking to bring back the Venza, a wagon-like crossover. An assembly line shift in Indiana could possibly accommodate this forthcoming model.

Toyota is celebrating the history of baseball's Negro Leagues in its new commercial.

When baseball players in the Negro Leagues showed up, they showed out. That's what the redesigned 2020 Toyota Highlander is trying to do with its sleek new exterior and refined interior. A new commercial from the Japanese automaker called "Home Team" looks to shine light on both.

This year marks the 100-year anniversary of Negro Leagues Baseball, the segregated alternative to Major League Baseball that existed prior to integration in the late 1940s. In honor of the centennial, Toyota opted to include a player from that era in their latest commercial.

James "Jim" Robinson, former captain of the Kansas City Monarchs is featured as the family patriarch in the spot, titled "Home Team." Robinson's career started after Jackie Robinson had made it to the Yankees, in 1947. The young Jim Robinson played his first Negro Leagues game for the Philadelphia Stars at Yankee Stadium.

After also playing for the Indianapolis Clowns, Robinson earned an invite to try out for the St. Louis Cardinals. The Korean War interrupted his chance to try out then, but after serving 21 months in the military, he got another chance. After his tryout, the Cardinals assigned him to a Class B minor-league team.

Instead of accepting his fate, Robinson instead left the Cardinals affiliate and took his chances with the Kansas City Monarchs. It's a replica of that Monarchs jersey that Robinson wears in the Highlander commercial.

The Toyota commercial was filmed partly at the Negro Leagues Baseball Museum in Kansas City, Missouri.

"We are truly delighted that Toyota has chosen to honor the unsung heroes of the Negro Leagues this way," says Bob Kendrick, President, Negro Leagues Baseball Museum. "The passion, determination, and unwavering spirit from these individuals is truly an American story."

Go behind the scenes of the commercial below.

The Toyota Supra has two new iterations for the 2021 model year.

The next chapter of the Toyota GR Supra is here. For the 2021 model year, the GR Supra 3.0 models get a power boost and retuned chassis, and new GR Supra 2.0 turbo-four joins the lineup. There is also a new special edition.

All the new models will arrive at dealerships in June. 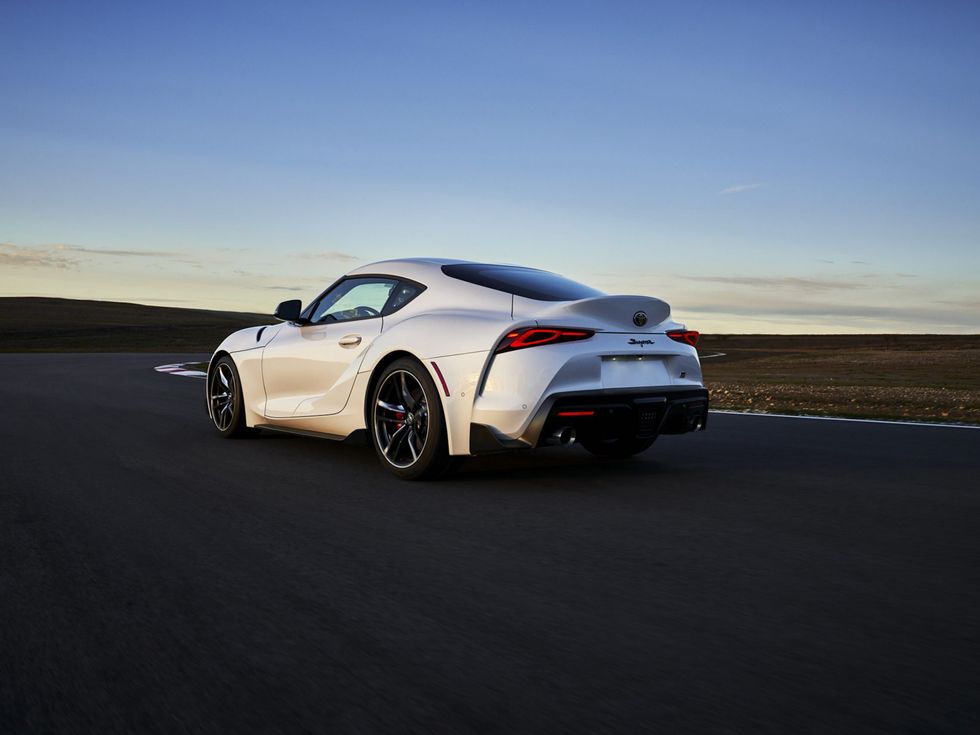 Toyota is boosting the output of the model's inline six-cylinder engine from 335 horsepower to 382 horsepower. The torque rises from 365 pound-feet to 368 pound-feet. These upgrades are achieved by changing up engine and engine-related components including a new dual-branch exhaust manifold, with six ports instead of two, that improves heat management. A new piston design reduces the engine's compression ratio from 11:1 to 10.2:1. Toyota expects that the Supra's zero to 60 mph acceleration time will decrease from 4.1 seconds to 3.9.

The 2020 GR Supra won praise for its ride/handling balance, but even the exceptional can be improved. Seeking increased roll resistance and enhanced cornering stability, Toyota retuned the Supra 3.0 chassis, adding lightweight aluminum braces that tie the strut towers to the radiator support to increase lateral rigidity, along with front and rear bump stops and new damper tuning.

The company has also reprogrammed the electric power steering, adaptive suspension, vehicle stability control, and active differential, which work in concert with the hardware changes. 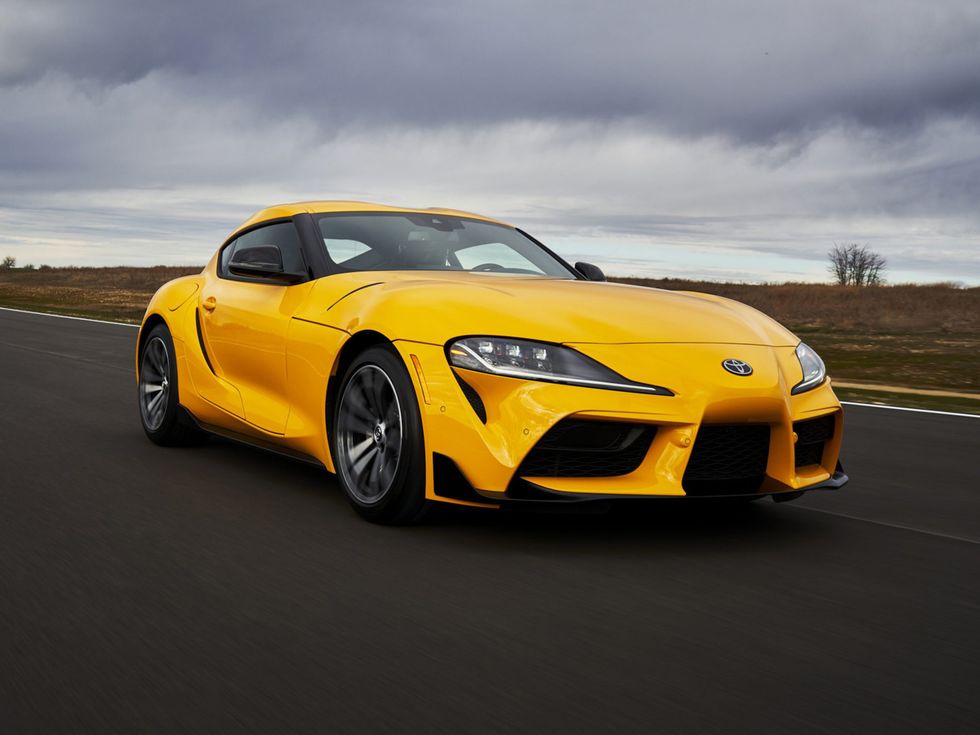 The Supra 2.0 will be Toyota's new GR Supra base model. It shares much of its technology with the Supra 3.0 including a twin-scroll turbo, direct fuel injector, and continuously variable timing on the intake and exhaust camshafts, only with a 2.0-liter four-cylinder engine as its heart. The engine is paired with the same eight-speed automatic transmission that the 3.0 has.

This new version of the Supra has a power output is 255 horsepower and 295 pound-feet of torque. It too has an electronically limited top track speed of 155 mph but will have lower fuel consumption than the Supra 3.0 thanks in large part to its 200 pound weight difference that maintains the car's 50:50 weight distribution.

To shed the weight, a few key changes were made. Supra 2.0 uses smaller front brake rotors with single piston calipers, it does not have an active differential or adaptive suspension, a four-speaker sound system is standard, and instead of 14-way power-adjustable seats, the Supra 2.0 has manually adjustable seats. 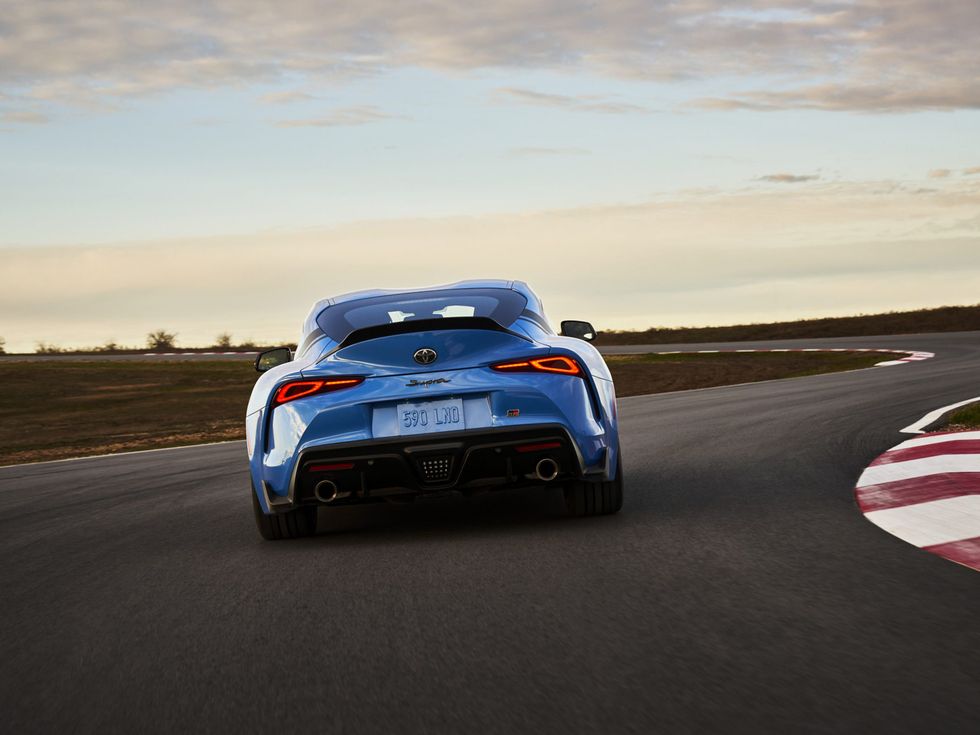 Toyota will offer 1,000 A91 Editions of the Supra. They will all have the 3.0-liter inline-six-cylindner engine that was standard in 2020 and will be available in two colors: Nocturnal or Refraction. The Refraction paint ob is exclusive to the A91 Edition. The cars get a rear black carbon fiber lip spoiler, matte black wheels, C-pillar graphics, and carbon fiber mirror caps. Front Brembo brake calipers are painted red and feature the "Toyota Supra" logo.

In the cabin is a black Alcantara® leather-trimmed interior with blue contrast. Each special edition comes with two exclusive key gloves and trunk mat. A 8.8-inch infotainment touch screen is standard.

The Safety and Technology Package is new for 2021 and will be available on the 2.0 and 3.0 grades. That package includes:

The Driver's Assist Package will still be an available option on the 3.0 Premium and A91 Edition. That package includes:

Expect the 2021 Toyota GR Supra 3.0 to be priced nearly the same for 2021 and the Supra 2.0 to have a lower MSRP than that model. The special edition will likely be sold at a premium.