The E-10 Concept reimagines hot rodding as an electric pursuit.

Drop it low, just don't plan on dropping it into 4 Low. Chevrolet has reimagined the future of hot rodding with an electrified concept truck. It took just 18 weeks to build, from the initial concept conception to the truck's arrival at SEMA.

The vehicle started its life as a 1962 Chevrolet C-10 pickup truck. It is now powered by Chevrolet's Connect & Cruise concept crate propulsion package. This package the truck 450 horsepower using the same proven powertrain components that are in the Chevrolet Bolt EV. Chevy says that the truck has a zero to 60 mph time of around 5 seconds and that it can do a quarter mile in around 13 seconds. 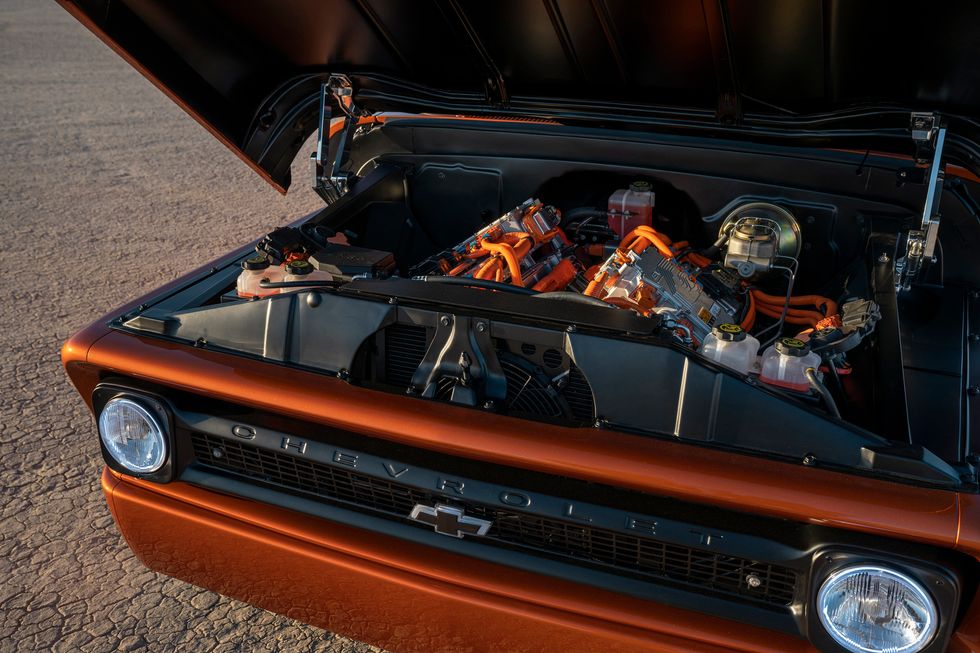 Under the hood are the same components that propel a Chevrolet Bolt EV.Photo courtesy of Chevrolet

"The Chevrolet E-10 electrified Connect & Cruise concept system reimagines the performance crate engine for hot rodders," said Jim Campbell, vice president of Performance and Motorsports. "As General Motors continues to work toward our vision of a zero-emissions world, concepts such as this help us get there, while still supporting the enthusiasts who love to drive vintage vehicles." 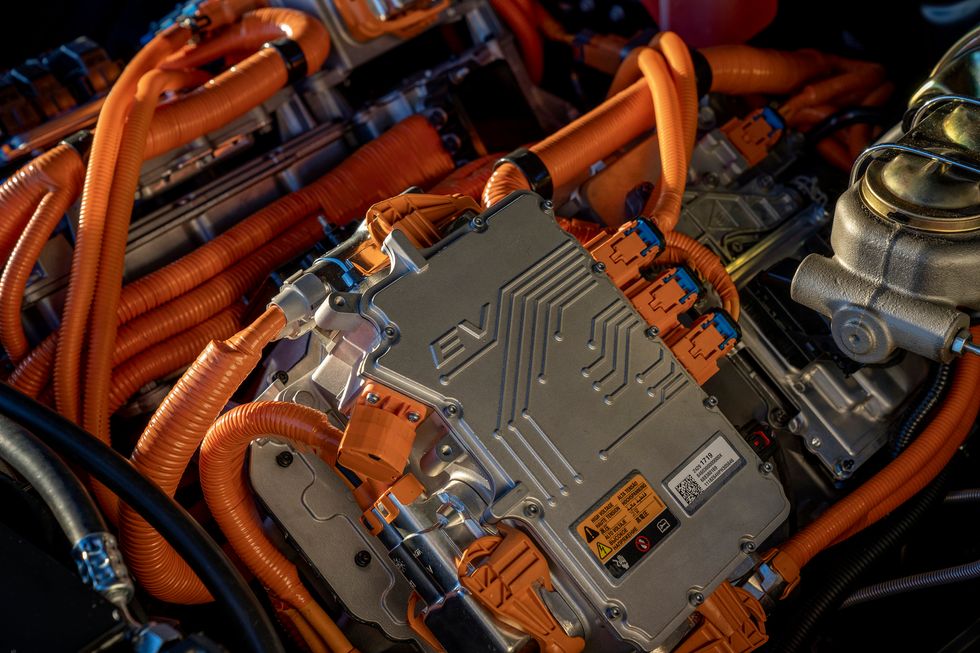 A three-motor system resides under the truck's hood.Photo courtesy of Chevrolet

Under the hood are a double stack of Chevrolet Performance concept electric crate motors (eCrate) and an automatic transmission that transfers torque to the truck's rear axle. The high-efficiency motors are built into modular housing that allows the three motors to be stacked and linked together. 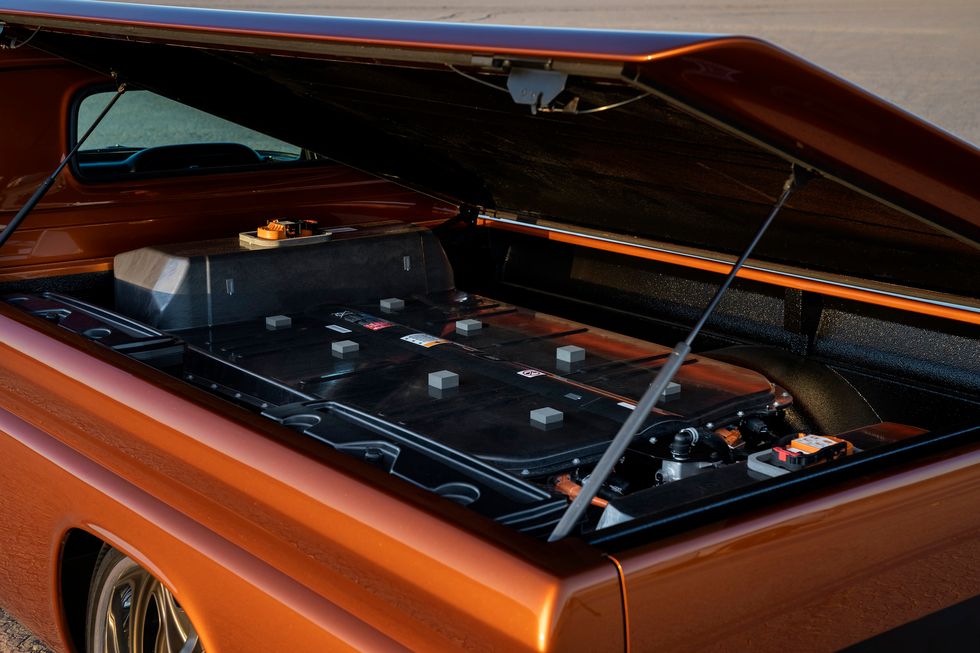 The truck gets its power from dual battery packs.Photo courtesy of Chevrolet

Two 400-volt batteries with 60 kWh of energy each rest in the bed of the truck under a hard tonneau cover. The two battery packs can be simultaneously charged and give the truck double the power that is in the Bolt EV.

"General Motors has the in-house talent required to create a concept like the E-10," said Campbell. "With the innovative thinking and expertise our performance team, electrification team and many others at GM bring, this project went from concept to running vehicle in 18 weeks to demonstrate what the future of an eCrate propulsion system and hot rodding could look like." 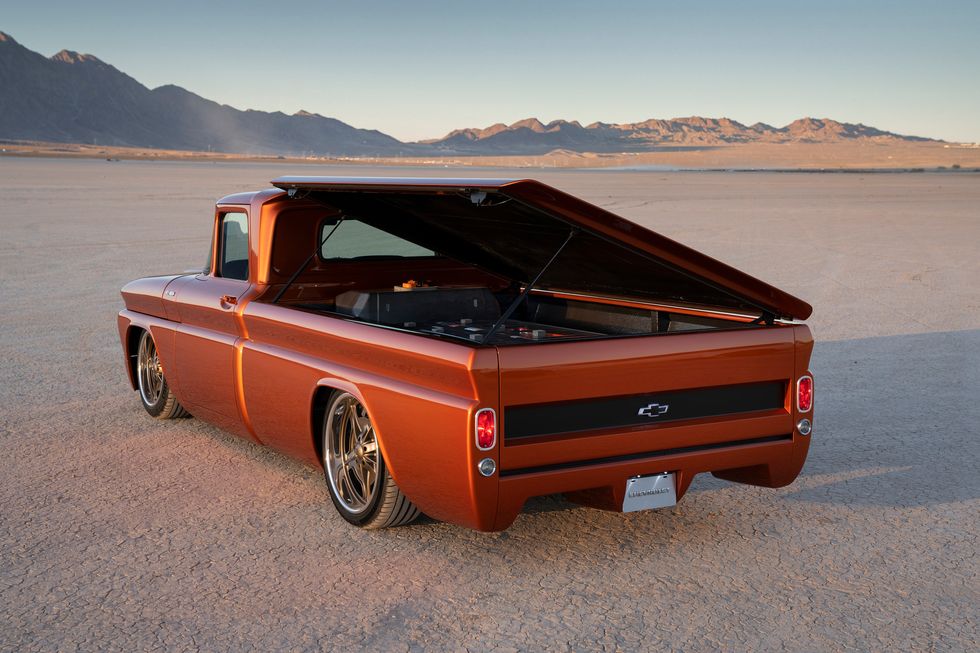 Chevrolet has covered the truck's batteries with a hard tonneau cover.Photo courtesy of Chevrolet

The truck's EV power means that it's lacking one central tenant of hot rodding- a grumbling exhaust. The E-10 does its best to make up for that, with three speakers that simulate the sound of a V8 (one on the front and two in the back). The system comes with five modes that a driver can choose: LS7 Z28 track tuning, LS7 Z28 touring turning, a V8 engine, a futuristic sound, or silent. The noise changes depending on the power output, mimicking the changing of gears of a powertrain that includes an internal combustion engine. 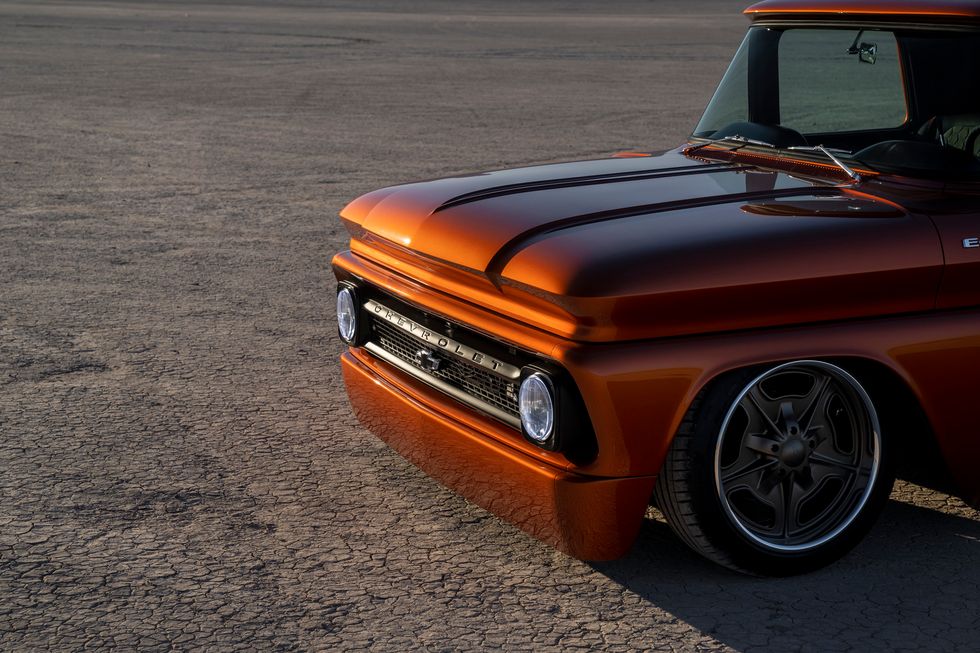 The truck still retains much of its vintage flair.Photo courtesy of Chevrolet

The exterior and interior of the truck combines vintage looks with modern technology. It has the classic body of a C-10 but also has an illuminated Bowtie emblem on the grille and LED headlights and taillights. The instrument panel has been updated with digital displays to showcase the electric propulsion system and the restored cabin's seating has been trimmed in leather.

Chevrolet has recently upgraded the Energy Assist version of the myChevrolet app.

Chevrolet has enhanced its myChevrolet mobile app to include a number of features that will help Bolt EV owners better live with their vehicle as part of their daily routine. 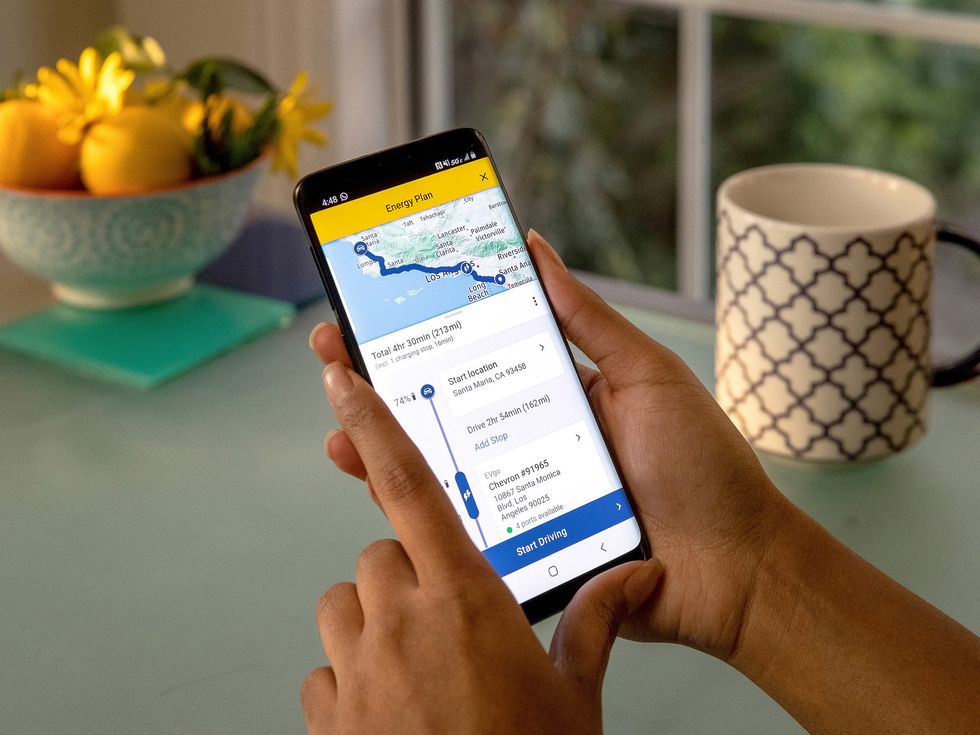 Energy Assist, which was first available within the app in 2017, enables owners to locate available charging stations along their route of travel. The function will integrate vehicle data that combines with that charging information. When range projections change dramatically, Energy Assist will push notifications to the user about updated charging needs and availability.

According to Chevrolet, updates include:

Dynamic Data Integration - GM is now displaying dynamic data from charging networks EVgo and ChargePoint within Energy Assist, so Bolt EV owners can have a more seamless charging experience with their GM vehicles. Information provided by charging networks includes real-time data on charge station status to indicate if a charging station is available. GM will integrate dynamic data from additional charging providers throughout 2020, which will include EV Connect continuing to enhance the customer experience.

The myChevrolet app is available for select Apple and Android devices.

The Chevy Equinox has gotten a fresh face for the 2021 model year.

Chevrolet is adding to and enhancing its popular Equinox SUV lineup. Among the changes to the model are fresh exterior design elements, a new RS trim level, and additional available safety technologies.

The front and rear fascias of the Equinox have changed, giving the car more aggressive styling that is in line with the looks of the Blazer. Its new LED headlamps and grille lead the way. 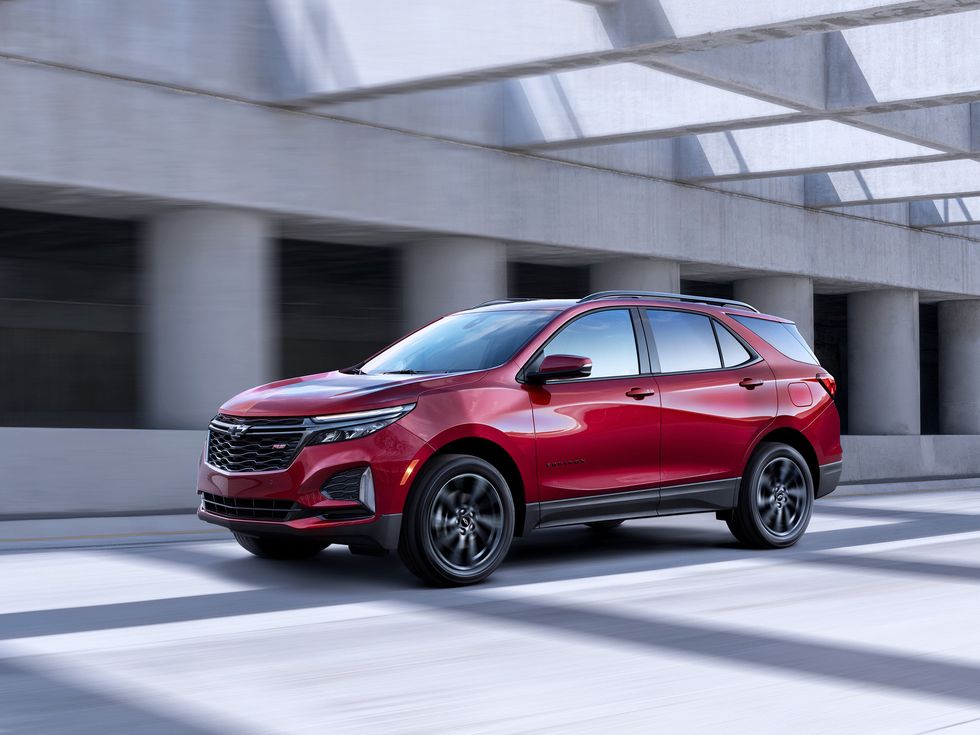 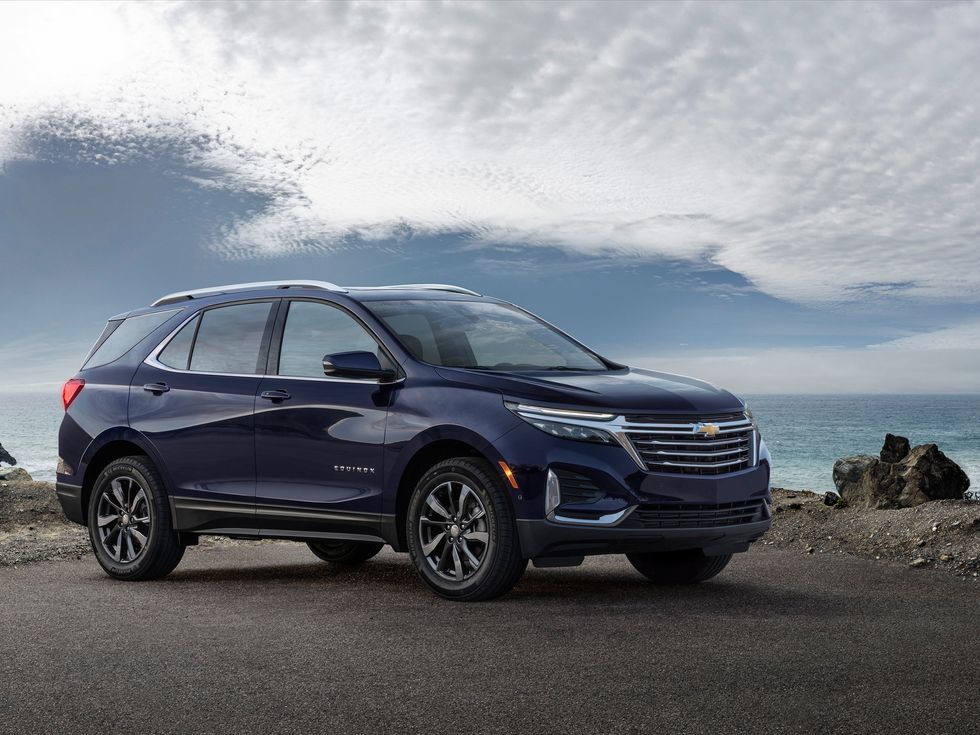 Chevrolet will continue to offer the Equinox with available all-wheel drive.

The top-tier Equinox Premier model comes with a gloss black grille with chrome inserts, LED headlamps and taillamps, 19-inch wheels, a projection logo project tailgate, french stitching on the interior, and a high gloss black finish on the console.

The 2021 Chevrolet Equinox goes on sale later this year. Pricing will be anounced closer to the model's on-sale date.