Do you know the stories behind these 5 historic Porsche 917 liveries?

Porsche is celebrating its past with a recent post on their newsroom site featuring five different iconic liveries sported by the 917 during races. The liveries sport famous designs including looks including Martini, Gulf, and one known as the "Pink Pig". Below are the featured liveries and the stories behind them. 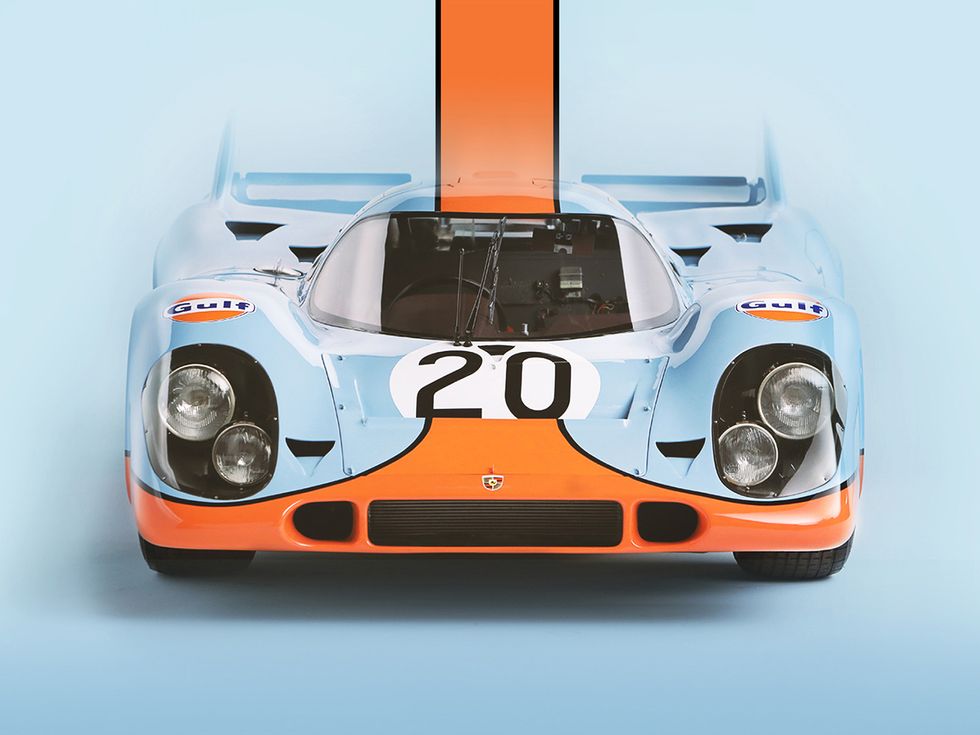 The Gulf-liveried Porsche 917 is most popular because of its appearance in the Steve McQueen film "Le Mans". The car used in the film sold for $14 million in 2017, which was, a sum making it the most expensive Porsche in the world. 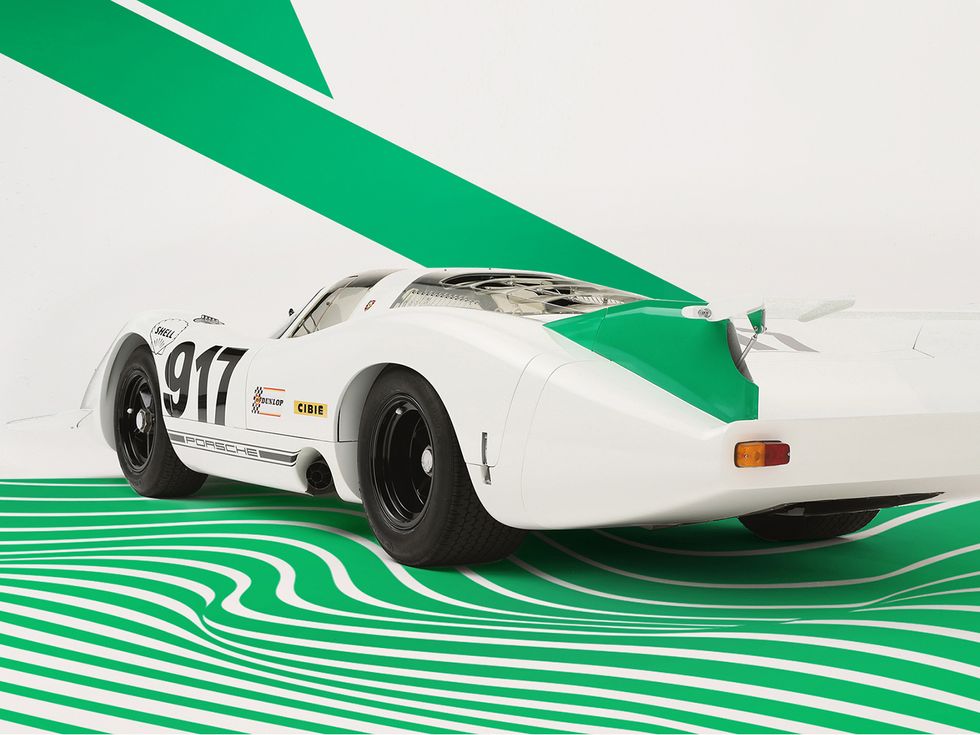 Despite it's race-like livery, the 917-001 was never a race car. The first Porsche 917, chassis number 001, was completed in March 1969, just two days before a press event announcing the arrival of new Porsche Group 4 sports cars is set to occur. The following month the model received its homologation certification, meaning that it was approved for racing. However, instead of racing, the 001 became a show car and a test vehicle.

By the time the car made its way to the German International Motor Show in Frankfurt in September 1969, it had been repainted from a white body and green front to an orange and white paint scheme.

In 2017, in preparation for its "50 Years of the 917" anniversary event, the Porsche Museum decided to restore the 917-001 to its original appearance. Restoration as completed in 2019 and was commemorated with an appearance on the track at Goodwood. 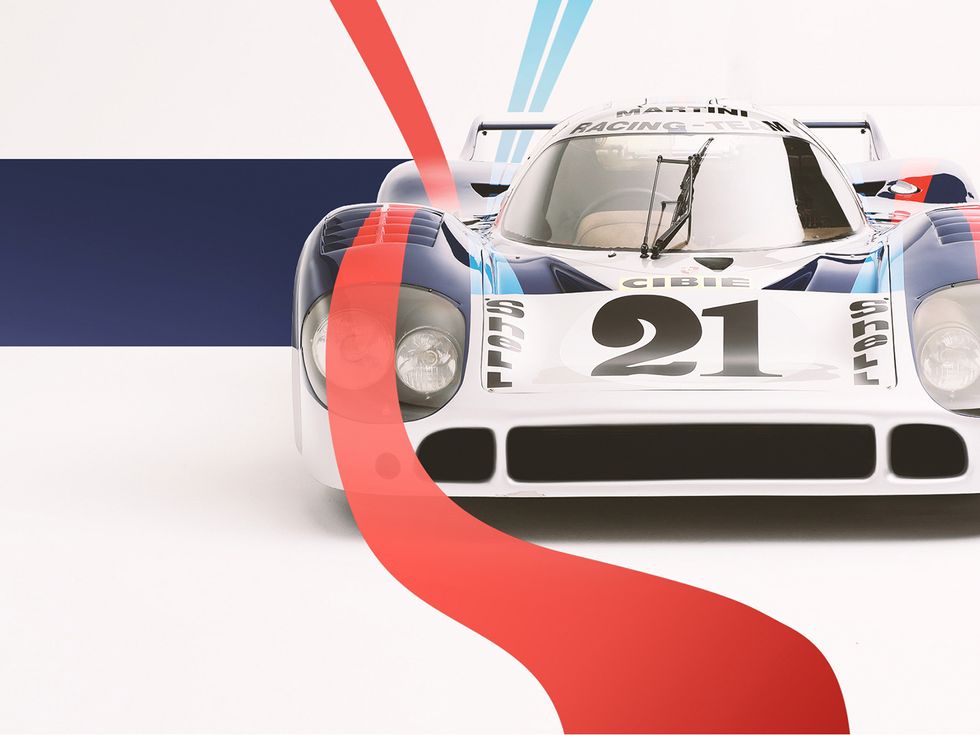 This isn't the original livery on this race car. The Porsche 917 pictured here originally had a green and purple stripe pattern. In 1970, the car, and the pattern, were retired after the vehicle suffered engine failure.

The fresh, and now iconic, Martini livery wrapped the car for the 1971 season when it became the first race car to set a record average speed of over 240 km/h at Le Mans. Currently, speeds top out around 330 km/h during the 24-hour race due to the shortening of the straights. 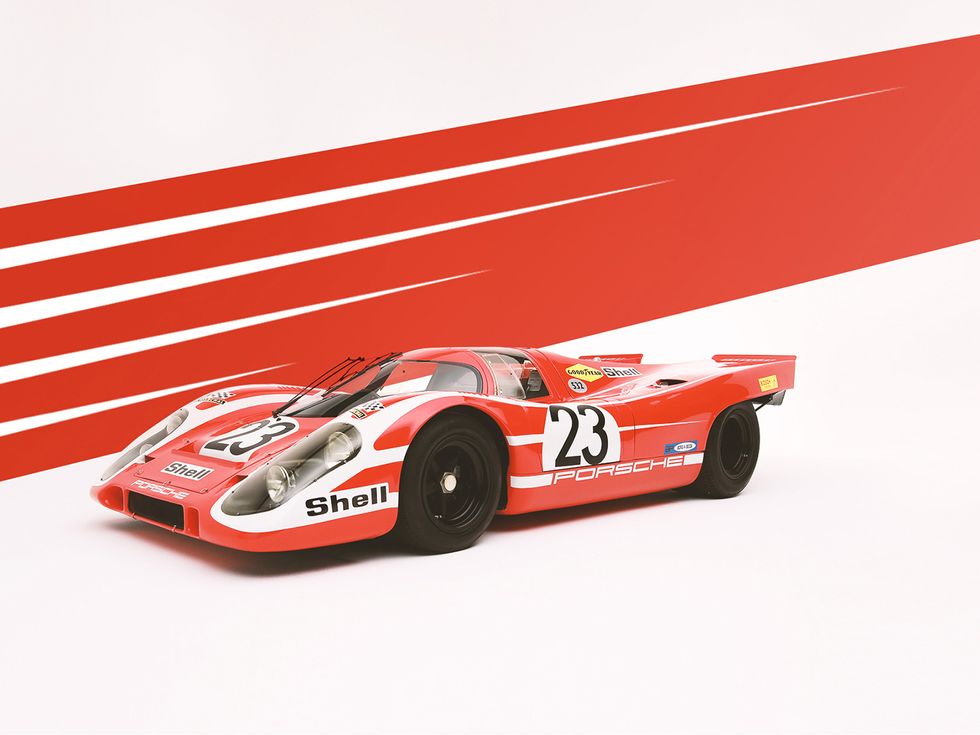 This 917 secured Porsche's first victory at the 24 Hours of Le Mans in 1970. The automaker was favored for victory, having placed well in each of the previous seven World Sportscar Championship races that season.

Its livery is based on the colors of the Austrian flag with its signature red earning the name "Salzburg Red". Saltzburg is one of the most populated cities in Austria and birthplace of Mozart and former Formula One racer Roland Ratzenberger.

The car raced for victory being driven by Hans Herrmann and Richard Attwood. It was powered by a 4.5-liter Ferrari flat-12 engine and completed 343 laps.

The 1970 Le Mans race was also significant because of its Hollywood connection. The race would provide the shots for the Steve McQueen movie "Le Mans". 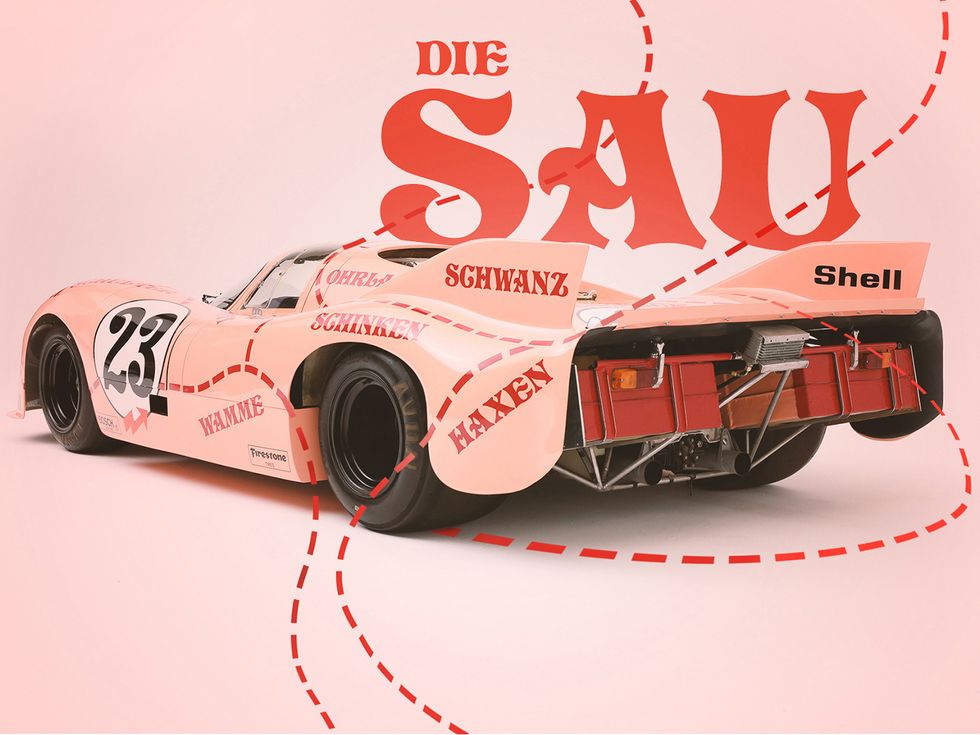 The Porsche 917/20 is a one-off that Porsche's engineers co-designed with SERA. Its body is elongated in height and width with very round wheel cutouts. Inside those cutouts, the wheels sit, hidden. Its nose is low and flat.

The model's unique pink paint job, decided upon by Porsche designer Anatole Lapine, has earned it multiple nicknames including "Pink Pig", "Big Berta", and "Truffle Hunter". The car's body parts are even labeled like butcher-style cuts.

It was the fastest car during the 1971 24 Hours of Le Mans pre-race qualifying runs. Piloted by Martini International Racing Team's drivers Reinhold Joest and Willi Kauhsen, the model was powered by a 4.9-liter Ferrari flat-12 engine. The car was running in fifth place during the race before it dropped out halfway through following an accident during lap 181.

Porsche 964. The name reminds Porsche enthusiasts of the pert and perky 911 era of the late 80s and early 90s that produced the first Porsches with a Tiptronic automatic transmission and all wheel drive as options.

Teddy Santis, founder and creative director of the popular New York fashion label Aimé Leon Dore (ALD), has collaborated with Porsche in restoring a 911 Carrera 4 from that era. The refreshed car is the product of months of research that included journeys to the Porsche Museum and the 911 assembly line in Stuttgart, Germany. 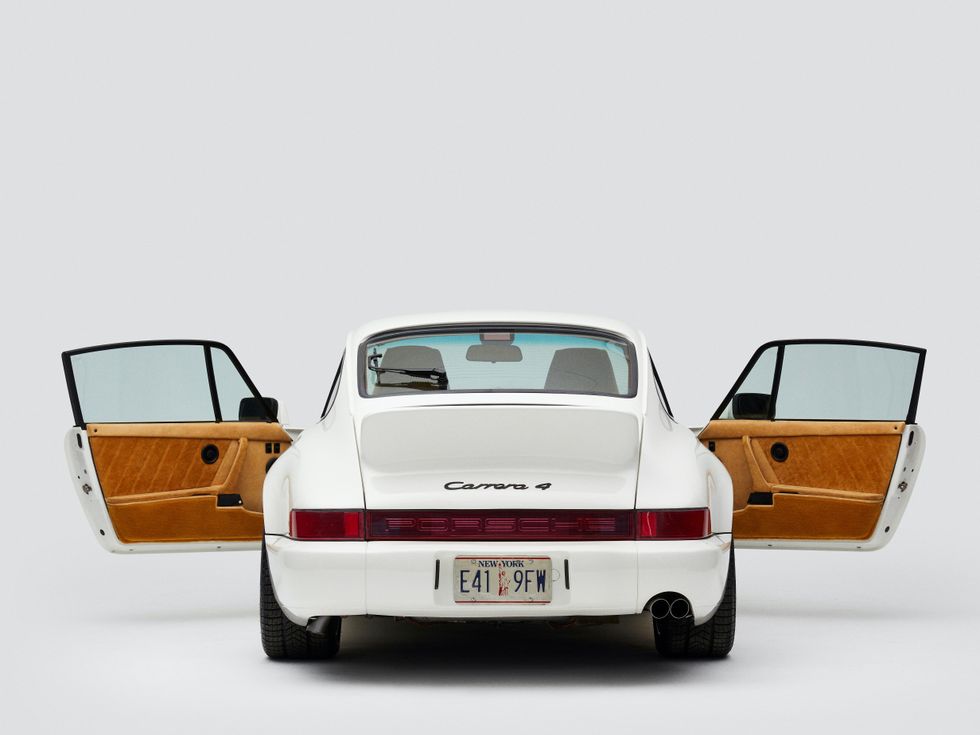 "Working together with Porsche on this project has been a dream come true," said Santis. "It has been a deeply humbling experience to be entrusted with a project of such importance to the Porsche community and to work together on a design that has been so instrumental in shaping my own outlook and aspirations."

The restoration utilized period-correct original Porsche parts and was supported by Porsche Classic.

The most notable part of the refresh is a fully custom leather interior featuring featuring Schott sunflower leather and Loro Piana houndstooth, the same materials highlighted in Aimé Leon Dore's Fall/Winter 2020 collection. It's bold yet calming and buttery yet strong.

The leather wraps around the dashboard, steering wheel, and door panels. The reverse suede side of the top-grain leather covers up the headliner and sunroof.

The seats of the Carrera 4 were taken to the Recaro workshop inn Kircheim, Germany where they were restored.

At the front, the interior of the frunk was covered in Schott leather with Loro Piana accents. Inside the trunk is a care bag inspired by classic Porsche design.

The exterior of ALD's flagship store on Mulberry Street in Manhattan is painted white and shares its shade with the exterior of the Porsche. A custom-designed grille badge is on the rear and takes inspiration from Porsche club memorabilia.

Nods to Porsche history complete the car including Cup 2 wheels, a graphic Pegasus above the front wheel, a rear ducktail.

A team of 150 people was use to shoot Porsche's Super Bowl commercial.

Porsche's Super Bowl commercial was half "The Italian Job", half security guard fantasy. As interesting as it was, the behind the scenes footage and stories are nearly just as much so.

The spot was filmed primarily in and around Porsche's headquarters in Zuffenhausen, Germany at the end of November 2019. Most of the 10 vehicles featured in the commercial are part of the Porsche Museum collection in the town including the new all-electric Porsche Taycan.

"We have a lot of experience preparing historic vehicles for all kinds of operations but driving a 917 through the centre of Stuttgart, at night, was a first even for us," explains Alexander Klein, Head of Vehicle Management and Heritage Experience at the Porsche Museum. "When we travelled to the location in the Black Forest the roads were covered in snow, and stayed that way until the evening before the shoot. Fortunately, we were prepared and had different tyre profiles and compounds with us, especially for the racing cars. We did not make any technical changes to the museum vehicles though."

Locations for the advertisement are easily identifiable to locals of the Stuttgart-Zuffenhausen area. The opening cuts of the commercial were filmed inside the museum. The cars zoom around the famous Porsche roundabout in Zuffenhausen and the route taken in the spot moves from Stuttgart, Heidelberg, and Heppenheim to the Schwarzenbachtalsperre dam in the northern Black Forest.

The driving was't left to amateurs. One of the drivers, Harald Müller, held the World Record for drifting, while Porsche factory driver Lars Kern was behind the wheel of the iconic 917 K.

Including the drivers, it took a team of 150 people to make the 2:31 extended cut of the commercial come to to life. 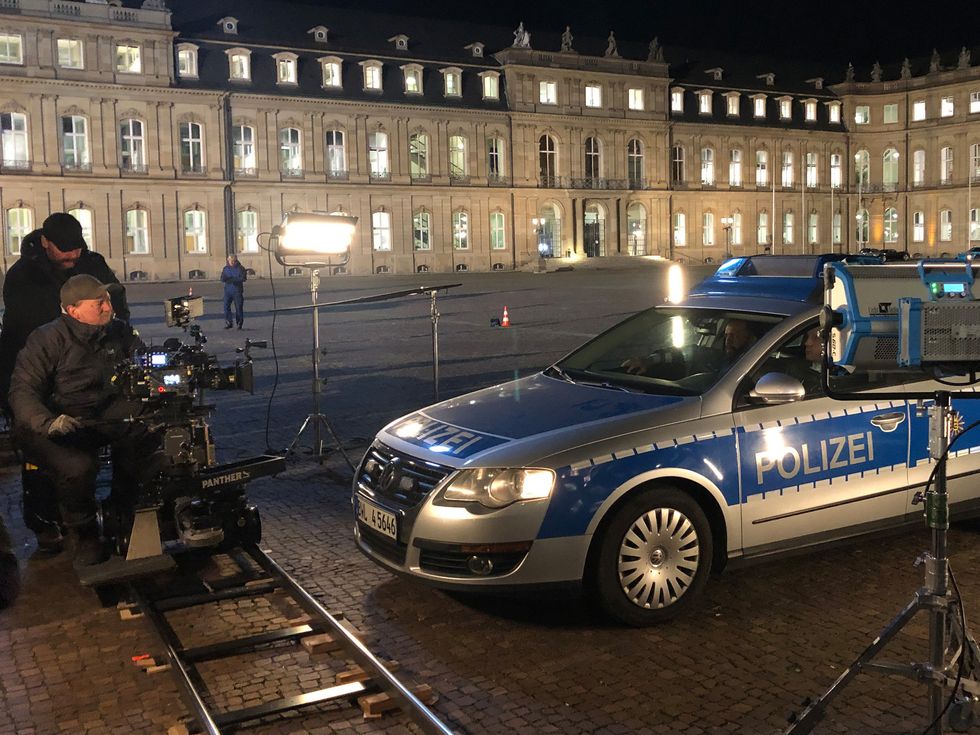 Porsche filmed most of the scenes for the ad around its Germany headquarters building.Photo courtesy of Dr. Ing. h.c. F. Porsche AG

The director of the product was Wayne McClammy, who, at points during filming, was using up to four cameras at the same time and had a Cayenne fitted with a Russian Arm: a roof-mounted camera crane. Arial shots were completed by two drones, including one that has a top speed of 160 km per hour.

The Super Bowl does't have to be the last time you see the ad. Check out the extended cut here.