The Polestar Precept signals a design turn for the company.

Polestar, the automaker owned by Geely, the parent company of Volvo, has evolved to be an electric performance car brand. With that evolution comes a look at what is ahead – in this case the Polestar Precept concept car.

Featuring an interior swathed in sustainable materials and a fresh take on the company's digital user interface, Precept is more than just a design direction. Polestar says that is, "a manifesto of things to come; a declaration." 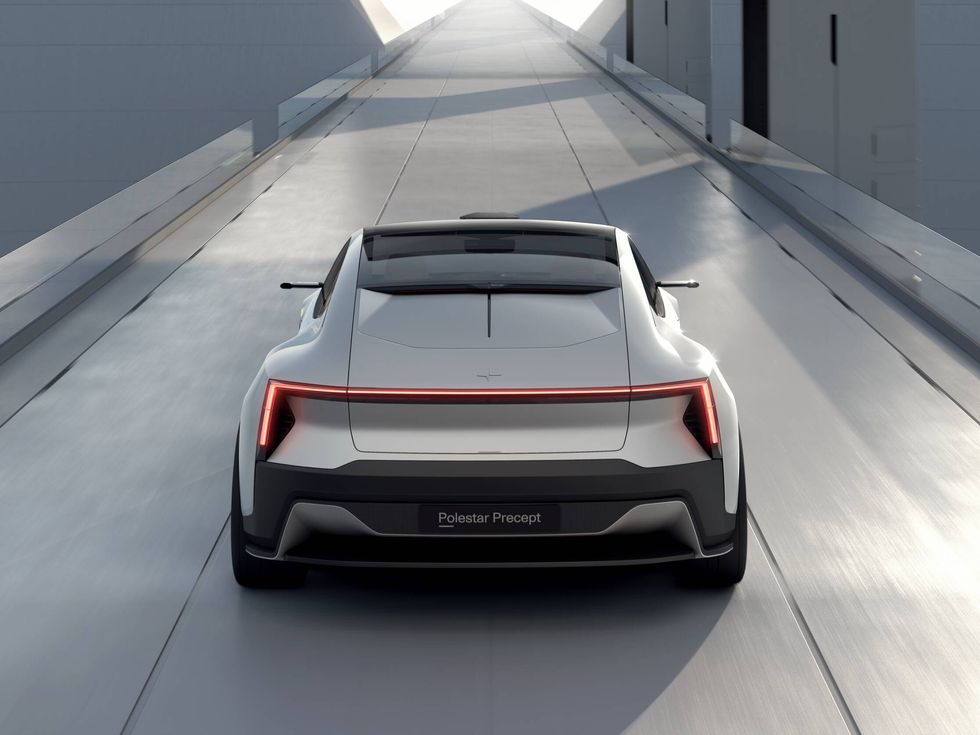 At the rear is a light bar that descends on each side into vertical aero-wings.Photo courtesy of Polestar

The car signifies a major milestone for Polestar. It emphasizes the brand's values: pure, progressive, and performance.

"Precept is a declaration, a vision of what Polestar stands for and what makes the brand relevant," comments Thomas Ingenlath, CEO of Polestar. "The car is a response to the clear challenges our society and industry face. This is not a dream of a distant future, Polestar Precept previews future vehicles and shows how we will apply innovation to minimize our environmental impact."

The car exhibits what Polestar calls "minimalistic athleticism". This is, in theory at least, the same design mantra Porsche follows with its 911. The exterior focuses on aerodynamic design rather than ornamentation. The Precept has a 3.1-meter wheelbase, which fits the car's large battery pack. Its four-door design takes into account a proper amount of head- and legroom in the rear for comfort.

At the front, instead of a traditional grille there's something the company calls "Polestar SmartZone". The area houses technology for safety sensors and driver assistance functions. The transparent panel at the front covers two radar sensors and a high-definition camera. A LIDAR pod is mounted on top of the glass roof. The traditional Thor's Hammer LED headlights from Volvo's bin evolve in this design with two separate elements. 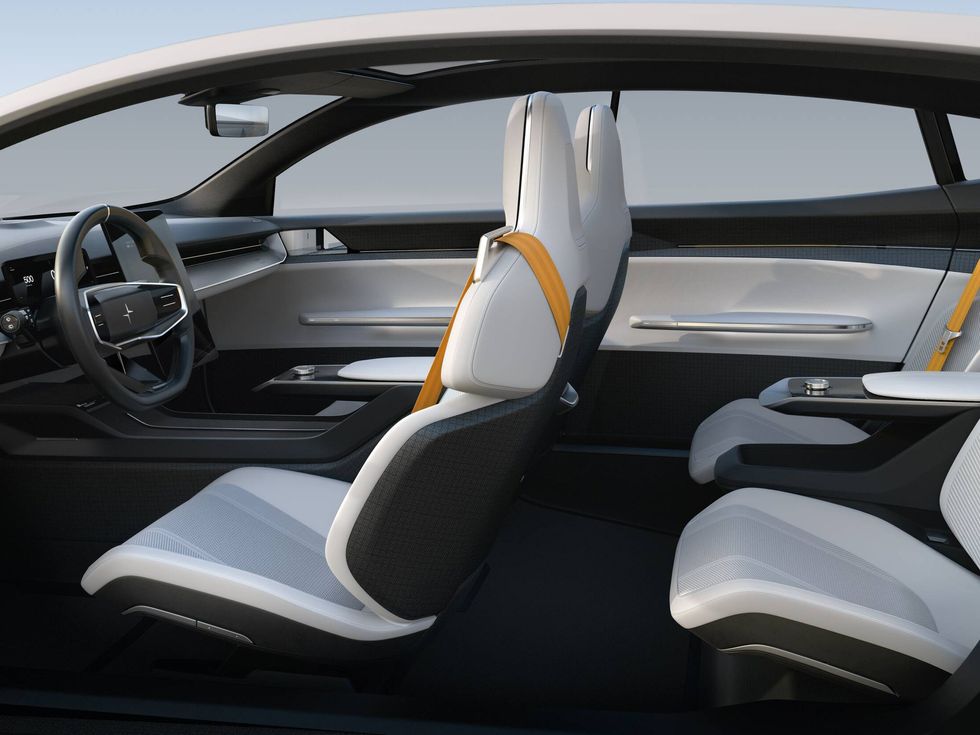 Above the SmartZone is an integrated front wing while a wide light-blade spans the entire width of the vehicle's backside, extending into vertical aero-wings.

Side mirrors have been replaced by camera mirrors that are extended into the air on an aerodynamic arm. Cameras like this have been appearing on vehicles for a few years and are already available in Europe. A similar style camera captures all activity at the rear of the car, eliminating the need for a rearview mirror.

Some of the materials that make up the Precept's interior include flax-based composites for interior panels and seatbacks. Seat surfaces are 3D-knitted from recycled PET bottles, bolsters and headrests are made from recycled cork vinyl, while carpets are made from reclaimed fishing nets. These elements, combined with digital artistry, define a new premium luxury that surpasses the conventions of leather, wood and chrome.

The digital interfaces of the car build on Volvo and Polestar's already-established relationship with Google. Running on Android, the portrait-oriented 15-inch center touch screen complements a 12.5-inch driver display. The instrument panel has an array of smart sensors that monitor a driver's gaze and adjust content on the screens accordingly.

A solid piece of Swedish crystal between the rear seat headrests.

The public will get their first look at the Polestar Precept during the Geneva International Motor Show next month.

The annual event is organized by the Austin Automobile Dealers Association, which has been around since 1946. Like other auto shows around the country, the Austin event serves as a way for attendees to cross-shop vehicles all in one place, often without the hassle of dealing with sales personnel.

A recent study by Capital One found that 74 percent of shoppers do not describe themselves as confident car shoppers. Cars.com research indicates that potential car buyers would rather clean toilets than go through the hassle of buying a car from a dealership.

The 2021 Austin Auto Show will be held at the Austin Convention Center and will be open to the public from morning until night on Friday, Saturday, and Sunday. Ticket pricing has yet to be announced.

More information about the Austin Auto Show can be found at www.autoshowaustin.com.

The 2020 New Mexico International Auto Show has been cancelled.

Due to the coronavirus outbreak, the 2020 New Mexico International Auto Show has been cancelled. The event will not be made up during the year and instead, the New Mexico Auto Dealers Association will focus on the 2021 event.

Though new dates for the show have not yet been announced, it is assumed that a future event will take place at the Albuquerque Convention Center, where the April event was to have taken place.

Like other auto shows around the country, the Albuquerque event serves as a way for attendees to cross-shop vehicles all in one place, often without the hassle of dealing with sales personnel.

A recent study by Capital One found that 74 percent of shoppers do not describe themselves as confident car shoppers. Cars.com research indicates that potential car buyers would rather clean toilets than go through the hassle of buying a car from a dealership.