Hyundai and Uber have teamed up to create future of air taxis.

Chances are that if you've taken an Uber recently, you've seen some new transportation additions to the app like scooters and the availability to share rides. Users can also summon a helicopter straight from their smartphone. Hyundai and Uber have announced a partnership to develop the next-generation of rides to share, Uber Air Taxis.

Hyundai is the first company that has partnered with Uber in their Uber Elevate initiative to bring automotive-scale manufacturing capability to the electric air vehicle development process. 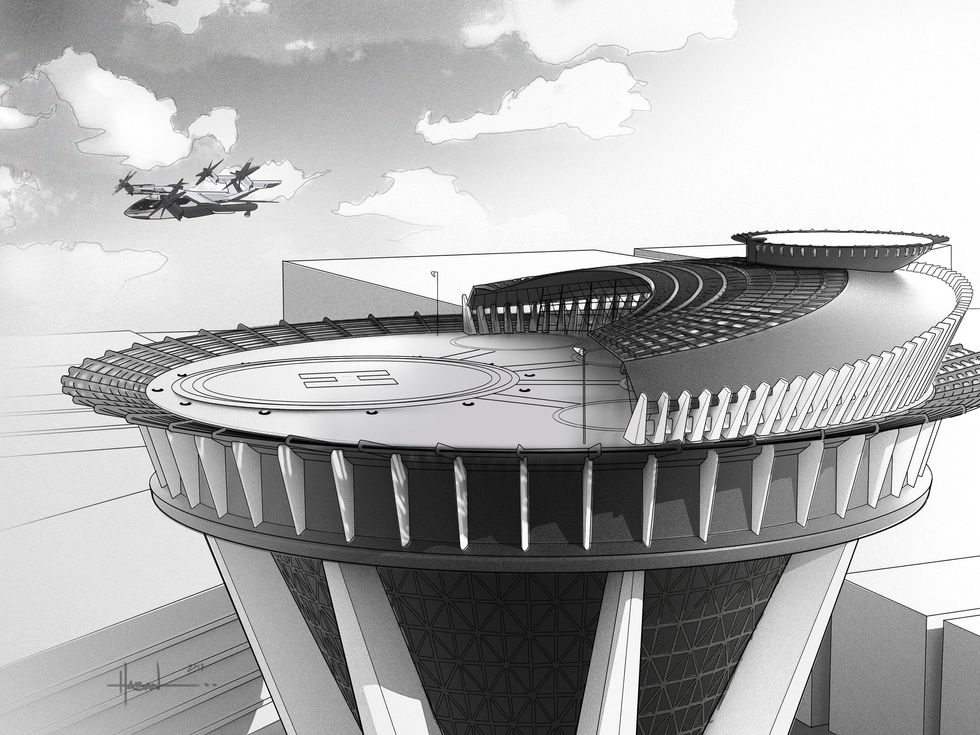 Hyundai and Uber will also collaborate on take-off and landing zone infrastructure.Photo courtesy of Hyundai

As part of the partnership, Hyundai will produce and deploy the air vehicles. Uber will provide airspace support services, connections for users from the air taxis to ground transportation, and customer interfaces through a sharing network. The companies are collaborating on infrastructure concepts to support take-off and landing zones.

Hyundai has released information on an air vehicle concept that used Uber's open design process, which was inspired by NASA and encourages publicly releasing vehicle design concepts so any company can use them to innovate.

As part of that design process, Hyundai is revealing:

This initiative is the latest in the in Hyundai's active approach to finding transportation solutions for cities of the future. Earlier this year, the company outlined their vision for those cities at a conference in San Francisco.

Hyundai has revealed the 11 hospitals that are receiving donations.

Last week, Hyundai Hope On Wheels and Hyundai Motor America announced that they were donating $2 million to 10 hospitals across the U.S. to aid with the operation of drive-thru coronavirus testing centers. This week, the two revealed that they upped the commitment, now offering help to 11 children's hospitals totaling $2.2 million.

"The Hyundai COVID-19 Drive-thru testing grants are designed to get urgent financial support to institutions on the front-line in the fight against the coronavirus" says José Muñoz, President and CEO, Hyundai Motor North America. "Children who are diagnosed with cancer are particularly at higher risk. That's why it was important to us to join forces with several children's hospitals around the nation to company this threat to the health and well-being of children. We are pleased to expand to 11 institutions nationwide, each with a $200,000 grant."

The Centers for Disease Control has built a website that offers resources to individuals who have questions about COVID-19, including how to identify symptoms, get tested, and decontaminate your home at www.cdc.gov.

Healthcare workers from the Colorado Department of Public Health and Environment check in with people waiting to be tested for COVID-19 at the state's first drive-up testing center on March 12, 2020 in Denver, Colorado. The testing center is free and available to anyone who has a note from a doctor confirming they meet the criteria to be tested for the virus

Hyundai Hope on Wheels (HHOW), a 501(c)(3) non-profit organization supported by Hyundai Motor America and its U.S. dealers, has announced that it has donated $2 million for COVID-19 drive-thru testing centers in partnership with children's hospitals across the U.S. HHOW has supported health and well-being initiatives for children with cancer since 1998.

"Hyundai is a company committed to improving the well-being of society and the health of children," says Jose Munoz, President and CEO, Hyundai Motor North America. "In the last few weeks, our society has been challenged with a major pandemic that has had significant consequences to life, safety and well-being. Children who are diagnosed with cancer are particularly at high risk. Through our Hyundai Hope On Wheels program, we are committed to being a strong partner on behalf of children's health and assisting during this time."

The following children's hospitals are the first three of ten to receive a $200,000 donation to support their Drive-Thru Testing Centers (additional hospitals to be announced):

"This is an unusual time in our nation as we combat the ravages of COVID-19 coronavirus," says Scott Fink, HHOW Board Chair and Hyundai dealer-owner, Hyundai of New Port Richey and Hyundai of Wesley Chapel. "Hyundai dealers across America unite with Hyundai to serve humanity, as we come together in this time of national crisis. Through our involvement with Hyundai Hope On Wheels, we know that children who are fighting cancer have weakened immune systems and are at a high risk for COVID-19. Together, we have directed additional resources to the various hospitals, who are arranging COVID-19 Drive-Thru Testing Centers at their facilities across the U.S."

For more information about Hyundai Hope On Wheels COVID-19 Drive-Thru Testing Centers, and to get the most updated list of partnering hospitals, visit www.hyundaihopeonwheels.org.