Ford engineers have thought of a sloppy but ingenious way to test autonomous driving development technology.

Thwack! That distinctive sound of a bug hitting the windshield is something drivers are all too familiar with. While the smear of a bug may impact a driver's visibility for a moment, the effect it could have on an autonomous driving sensor could result in a catastrophic system failure. That's something Venky Krishnan, autonomous vehicle systems core supervisor, Ford Motor Company has to spend time thinking about.

In a new post on Medium, Krishnan describes the extensive efforts Ford is putting into keeping those sensors clean. "We've sprayed dirt and dust onto our self-driving vehicle sensors. We've showered LiDAR sensors with water to simulate rainfall. We created our own synthetic bird droppings and smeared it on camera lenses," he shared. 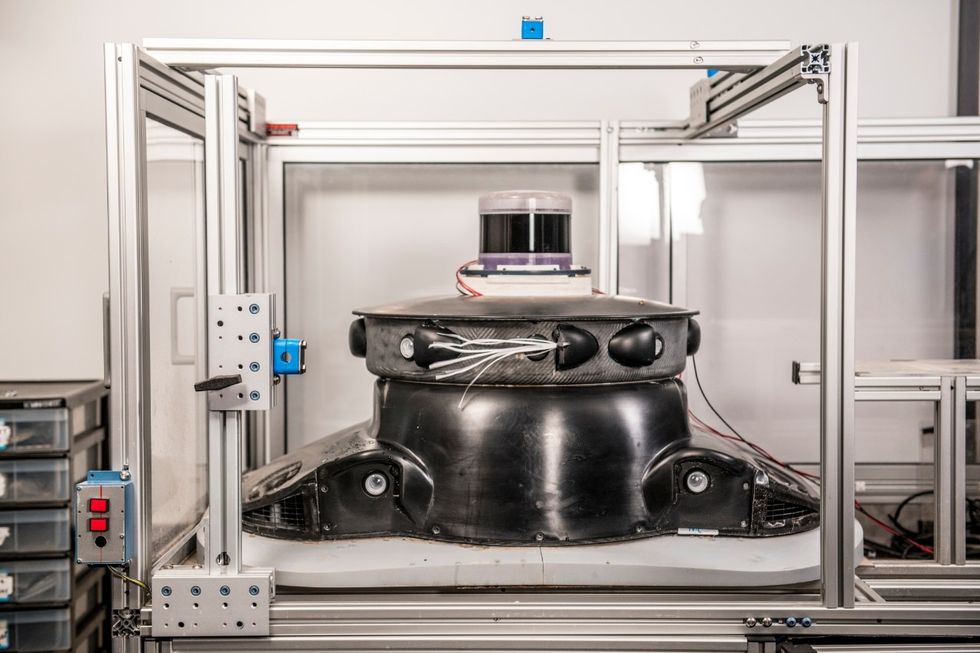 Ford's autonomous driving technology prototypes include a collection of cameras, LiDAR and radar that needs to be kept clean.Photo courtesy of Ford Motor Company

But that's not all. Ford enlisted the help of zoologist Mark Hostetler to help them discern which bugs are most likely to make contact with the sensors and how often those interactions happen.

The automaker even developed a bug launcher that allows them to shoot insects at vehicle sensors at high speeds, simulating the way they impact vehicles in the real world.

Ford has developed a cannon that shoots bugs onto its autonomous vehicle sensors to test how they operate under less than ideal conditions.GIF courtesy of Ford Motor Company

While the solutions are complex (the Ford team has already submitted over 50 patents worth of possible solutions to the issue), the issue may be best remedied by keeping autonomous vehicles from hitting bugs in the first place, according to Krishnan.

A new version of the system is now testing on Ford's third-generation self-driving test vehicle fleet in Detroit, Pittsburgh, Miami-Dade County and Washington, D.C. where the types of bugs and environments resulting in splatter vary greatly.

The DeLorean may be one of the most coveted cars on the planet. Despite its short time on dealership lots, the car became an instant class, thanks in no small part to the role it played in the "Back to the Future" movies. The future of the DeLorean is coming in fast and hot thanks to a team of engineers at Stanford's Dynamic Design Lab.

At Thunderhill Raceway in California, among the tire smoke, dirt, sand, and pavement, is a 1981 DeLorean nicknamed MARTY – which stands for Multiple Actuator Research Test bed for Yaw control – that has been converted into an all-electric self-driving drift car. The car is the work of recent mechanical engineering PhD graduate from Stanford Jon Goh and his colleagues at the Dynamic Design Lab.

MARTY's insides are nothing like they were in 1981 or in the "Back to the Future" movies. The car's powertrain has been replaced by electric motors and batteries. The car's soft suspension was enhanced with further stiffness to improve the car's ability to drift. Mechanical steering, braking, and throttle controls have all been replaced by electric systems. The car also has a new roll cage.

Two GPC antennae sit on MARTY's roof and are able to track the car's location within a single inch. Computers are stashed in the rear seats.

Four years ago, the DeLorean did its first drift moves with inhuman precision.

"We're trying to develop automated vehicles that can handle emergency maneuvers or slippery surfaces like ice or snow," said Chris Gerdes, mechanical engineer. "We'd like to develop automated vehicles that can use all of the friction between the tire and the road to get the car out of harm's way. We want the car to be able to avoid any accident that's avoidable within the laws of physics."

When a driverless car operates traditionally, the use of a steering wheel and pedals is relegated to simplistic movements to keep a car moving steadily or stopping with ease. With drifting, it's a completely different story.

"Suddenly the car is pointed in a very different direction than where it's going. Your steering wheel controls the speed, the throttle affects the rotation, and the brakes can impact how quickly you change directions," Goh said. "You have to understand how to use these familiar inputs in a very different way to control the car, and most drivers just aren't very good at handling the car when it becomes this unstable."

The Stanford team studied the habits of professional drivers and worked to duplicate those maneuvers when developing the software for MARTY.

"Through drifting, we're able to get to extreme examples of driving physics that we wouldn't otherwise," Goh said. "If we can conquer how to safely control the car in the most stable and the most unstable scenarios, it becomes easier to connect all the dots in between."

To get in deep on how MARTY was able to pull off the drift, check out the first MARTY-related journal paper.

Nuro is eyeing Houston as a pathway to success.

Houston — with its sprawl and winding roads broken up across various neighborhoods — is particularly challenging when it comes to self-driving car navigation. And that's exactly why Nuro, a California-based tech startup that's raised over $1 billion in funding, decided to focus on the Bayou City for its self-driving vehicle delivery pilot programs. 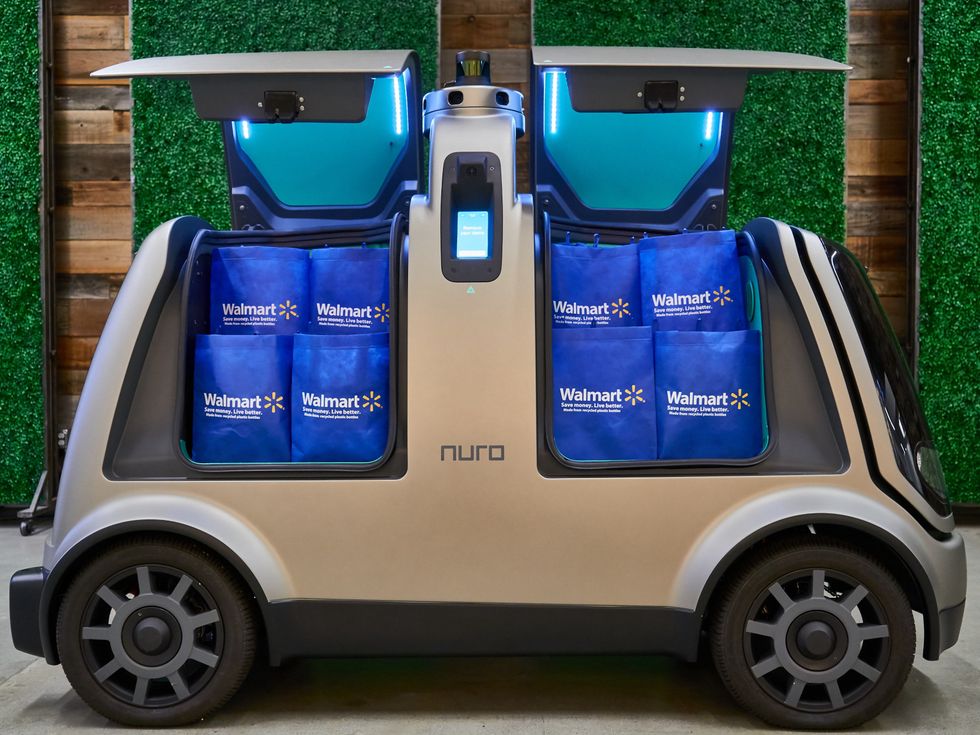 Last year alone, Nuro launched three pilots in six of Houston's ZIP codes from Bellaire to the Heights. The first of which was a partnership with Kroger in March, followed by the announcement of driverless pizza delivery from Domino's in June. Last month, Nuro announced its latest delivery partner was Walmart.

Lawal explains Houston's appeal to Nuro in a few ways, but the challenging landscape is key. Nuro cars are learning from the narrow, tree-laden streets of West University or the pedestrian-heavy, ditch-lined paths in the Heights.

"There's a ton for us to learn, but it's a great microcosm of the United States in a number of different ways," he says.

In addition to its diversity within its street types, Houston, named the most diverse city in the country, represents an ideal customer base, says Lawal, a Houston native himself. Houstonians are open minded about new experiences.

"If you think and look across Houston, the average commute is over 60 minutes for people to get back and forth," Lawal tells InnovationMap. "As we surveyed across major cities we were interested in, Houston stood out as a place where customers said they don't want go to the grocery store if they don't have to or get in their cars again to pick up their pizza."

The third reason Houston was a great market for Nuro is the amount of regulatory support the state of Texas has — Gov. Greg Abbott announced the launch of the Texas Connected and Autonomous Vehicle task force a year ago — as well as the support at the city level.

"It's been a welcoming environment from the mayor's office down for us to be here," Lawal says.

Since entering the Houston market, Nuro's local operations have grown to over 100 employees. The company still has software operations out of California, and some work being done in Arizona, but the Houston is the largest — and growing as the company seeks new partnerships with more stores with a goal of eliminating errands once and for all.

"The way that we think about this is that this new technology and our mission of accelerating robotics for everyday life, is we will bring the people what they want," Lawal says when asked about what types of stores Nuro is looking to partner with.

Eventually, Lawal says, the plan would be to have every errand be delivery optimized with Nuro technology — from big-box stores like Walmart to your local florist.

"Our goal is to have a platform that retailers can connect to in order to provide easy and inexpensive delivery," he says.

Currently, Nuro's technology is still in learning mode. Nuro's fleet of Prius cars with staff onboard are driving up and down Houston streets mapping and taking notes on a daily basis. The company also has bots, called the R2 fleet, that are designed to be unmanned.

These bots are smaller than normal cars and are completely electric. Rather than being designed to protect passengers inside like traditional automobiles, the R2s are designed to be safe for people outside the vehicle.

"It's a new way of thinking about transportation and what our vehicles can and should do," Lawal says.

2020 is the year of these R2 bots, and some areas can expect to see them in action — specifically focused on Domino's pizza delivery — in just a matter of weeks.