Starbucks used to be the go-to third space for people not wanting to go to work or be at home. Audi is taking that idea one step further with the debut of the AI:ME concept vehicle.

The model features futuristic technology like eye tracking to communicate with the car when using things like gesture control or tapping a screen become too taxing. Audi fantasizes that the vehicle's occupants could enjoy a "wellness experience" consisting of donning a pair of virtual reality goggles and "flying" over a mountain landscape. 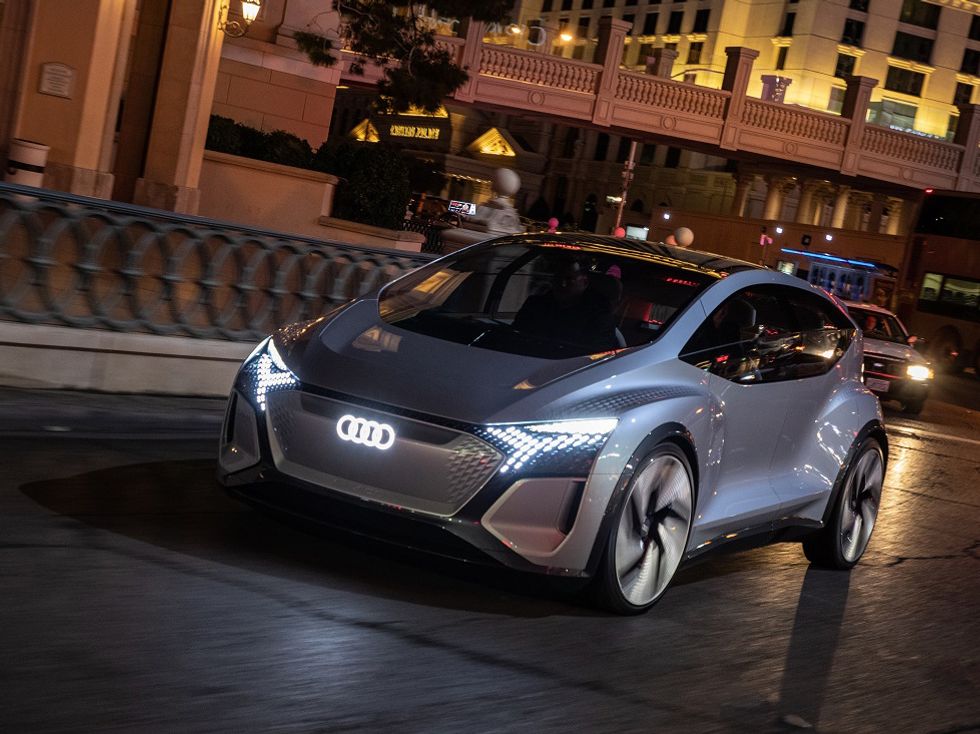 Audi says that the concept car would adapt virtual content to the movement of the vehicle in real time allowing passengers to truly relax and get away from their hectic routine. So, basically the opposite of hopping on the train to get to work.

Technology in the car could also be used to order food and have it delivered to a vehicle's destination at the appropriate time using personal preferences and the vehicle's navigation data.

The concept car features the "Audi Intelligence Experience", which the automaker says makes the car think for itself, getting to know a user's habits. This technology is already integrated into the current generation Audi MMI system. In that form it saves preferred destinations; connects drivers with the date, time and current traffic situation; and it derives suggested routes from this data. In the future it could "conduct a precise analysis of the functions and settings that its user prefers, ranging from the seat position, media, route guidance and temperature to the fragrance of the interior" according to a release.

There are currently no autonomous vehicles for sale today, despite the keywords used and hype generated in media.

The DeLorean may be one of the most coveted cars on the planet. Despite its short time on dealership lots, the car became an instant class, thanks in no small part to the role it played in the "Back to the Future" movies. The future of the DeLorean is coming in fast and hot thanks to a team of engineers at Stanford's Dynamic Design Lab.

At Thunderhill Raceway in California, among the tire smoke, dirt, sand, and pavement, is a 1981 DeLorean nicknamed MARTY – which stands for Multiple Actuator Research Test bed for Yaw control – that has been converted into an all-electric self-driving drift car. The car is the work of recent mechanical engineering PhD graduate from Stanford Jon Goh and his colleagues at the Dynamic Design Lab.

MARTY's insides are nothing like they were in 1981 or in the "Back to the Future" movies. The car's powertrain has been replaced by electric motors and batteries. The car's soft suspension was enhanced with further stiffness to improve the car's ability to drift. Mechanical steering, braking, and throttle controls have all been replaced by electric systems. The car also has a new roll cage.

Two GPC antennae sit on MARTY's roof and are able to track the car's location within a single inch. Computers are stashed in the rear seats.

Four years ago, the DeLorean did its first drift moves with inhuman precision.

"We're trying to develop automated vehicles that can handle emergency maneuvers or slippery surfaces like ice or snow," said Chris Gerdes, mechanical engineer. "We'd like to develop automated vehicles that can use all of the friction between the tire and the road to get the car out of harm's way. We want the car to be able to avoid any accident that's avoidable within the laws of physics."

When a driverless car operates traditionally, the use of a steering wheel and pedals is relegated to simplistic movements to keep a car moving steadily or stopping with ease. With drifting, it's a completely different story.

"Suddenly the car is pointed in a very different direction than where it's going. Your steering wheel controls the speed, the throttle affects the rotation, and the brakes can impact how quickly you change directions," Goh said. "You have to understand how to use these familiar inputs in a very different way to control the car, and most drivers just aren't very good at handling the car when it becomes this unstable."

The Stanford team studied the habits of professional drivers and worked to duplicate those maneuvers when developing the software for MARTY.

"Through drifting, we're able to get to extreme examples of driving physics that we wouldn't otherwise," Goh said. "If we can conquer how to safely control the car in the most stable and the most unstable scenarios, it becomes easier to connect all the dots in between."

To get in deep on how MARTY was able to pull off the drift, check out the first MARTY-related journal paper.