Ford has confirmed that the Bronco will return to off road racing this year, as a prototype.

Ford will mark the new Bronco's return to off road racing in this year's Baja 1000. AutomotiveMap's first reported that Ford was working on an off-road racing variant of the SUV earlier in October.

Today, the automaker unveiled the Bronco R next to the 1969 Baja 1000 winner Bronco, which was piloted by Rod Hall and Larry Minor. The new Bronco R will be driven in part by Shelby Hall, Rod's granddaughter, who will drive in honor of her grandfather.

The top-secret event took place at the start of SEMA week in Las Vegas, on the day that Rod Hall is being honored at the Off Road Motorsports Hall of Fame, located nearby the dry lake bed where the new race vehicle was revealed to a small contingent of the automotive press.

The one-off tribute vehicle will test the powertrain and suspension of the forthcoming Bronco model, which will officially debut in the spring of 2020. It features numerous tributes to the Hall Racing history including the No. "2069" on the rear quarter panel wing. The "20" tells of the class of the vehicle while the "69" signifies what year Hall Racing first won the race, which was then known as the Mexican 1000. 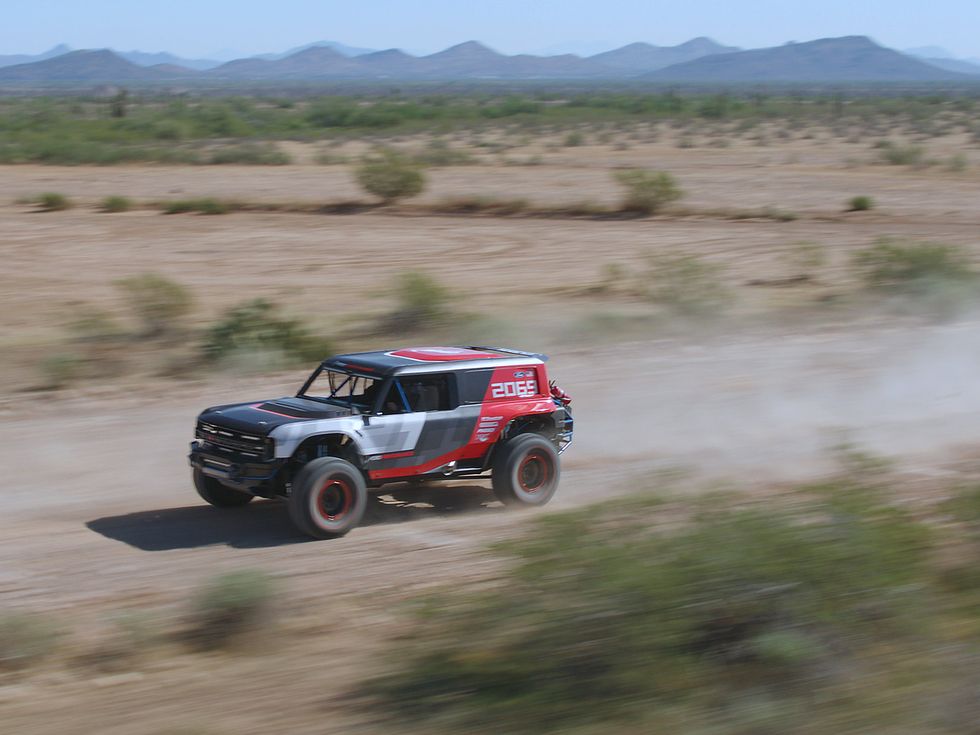 "I am so excited and so honored to be a part of Ford's team to bring the Bronco back to off-road racing," said Shelby Hall as the dust settled and she stepped out of the restored Bronco that her grandfather Rod Hall drove in the 1969 Baja 1000. That legendary win spawned a career that bestowed him with the accolade of "winningest racer of the Baja 1000" and made him one of the most-renowned desert racers in the world.

Shelby Hall is a third-generation Hall family racer, who was trained by and had raced with her grandfather many times, and now will be part of Ford's team when this year's Baja starts in Encenada, Mexico later this month. "The adventure continues for my family—and for Rod, even though he passed away earlier this year. It will be his 50th birthday the day the race starts and the 50th anniversary of his Baja 1000 win, when we strap into the new Bronco R race truck. We will be taking the Bronco back to the Baja and I can imagine him sitting in this new race Bronco—and whooping it up!"

The Bronco R's story all began in July, hidden behind a security door in a Ford studio basement. Led by Paul Wraith, Bronco chief designer, the Bronco R was co-developed by Ford Performance in collaboration with builder Geiser Bros. Design and Development and Baja 1000 Trophy Truck champion Cameron Steele.

"For me, it's an awesome opportunity to step into the new Bronco R in the upcoming Baja 1000 and follow in the footsteps of a famed racer that I got to see and know as a kid growing up, " said Cameron Steele, one of the country's top off-road racers who started watching the Baja races at age 2, began navigating for his Dad 36 years ago and started his own career 32 years ago. "It's mysterious to be in these shoes."

The team created a design that is informed by Ford's Bronco heritage and modern off-roading equipment requirements. The team used cutting-edge tools including virtual reality, polygon modeling, and 3D printing to develop parts. Low-fidelity prototyping and role-playing aided their problem-solving during development.

Ford says that this model has a compressed body height, long-travel suspension, and ultra-wide stance, giving a few solid clues about what to expect from the forthcoming Bronco.

It has a slightweight composite body that includes a clamshell hood and roof. There are also clean body panels that are reminiscent of the first-generation Bronco. Washers inscribed with the Bronco name are can be found around the exterior.

Recaro seats provide the interior accommodations for three. There is also a MoTeC data acquisition system.

Watch: This is the extended cut of Porsche's 'The Heist' Super Bowl ad

Porsche is returning to Super Bowl advertising after a 25-year hiatus.

Some of the most famous car chases in cinematic history belong to "The Italian Job," ""Bullitt", "Gone in 60 Seconds", and "Smokey and the Bandit". Porsche's commercial, airing during Super Bowl LIV, features a car chase featuring Porsche models past and present, with elements of these classic chases thrown in.

The commercial was shot in various locations across Germany in November 2019 including Heidelberg, Heppenheim, the Black Forest and Stuttgart-Zuffenhausen. The Porsche Museum, where the chase and commercial begins, is the home of some of the company's most prized models. The commercial features models out of that collection including a 917 K racing car, the 918 Spyder hybrid super sports car, and the Porsche 911. The cars were modified for use in the commercial.

"The Super Bowl is famous as a TV event far beyond North America and it represents a perfect platform to reach new fans. Our commercial links many elements that make up Porsche: sportiness, emotion, and also a touch of humour, something that is typical for how we communicate in general," said Oliver Hoffmann, Director Marketing Communications at Porsche.

This is Porsche's first foray into Super Bowl advertising this century. Their last Big Game commercial was 25 years ago.

The extended cut is 2:31 long. A one-minute version of the commercial will play during the Super Bowl.

In the 1:20 version of the ad, Evans stands outside a coffee shop in the heart of Boston and notices someone trying to park in a very narrow spot. Dratch walks up and they discuss, in a thick Bostonian accent, how there is no way a car can get in that spot.

The first car drives away and the 2020 Sonata appears. The window rolls down revealing Krasinski at the wheel. The three, with matching accents, discuss this seemlingly impossible park job. Krasinski gets out of the Sonata and showcases Hyundai's "Smaht Pahk" technology that remotely moves the vehicle into and out of the tight parking spot with ease.

While Krasinski rattles off all of the iconic Boston places he's parked the car while talking to Evans and Dratch, Ortiz, who is in a nearby building, opens a window and shouts down at the group to ask what is going on, before also finding out about Hyundai's new remote parking technology.

The commercial also includes several Boston "Easter eggs" for viewers paying close attention, including the well-known Boston song "Dirty Water" by the Standells that plays towards the end of the spot.