The Chevrolet Tahoe and Suburban have gotten a makeover for the 2021 model year.

When the Chevrolet Silverado was redesigned for its current generation, there was little doubt that a redesign of the Tahoe and Suburban weren't far behind. Now it is certain. The 2021 Chevrolet Suburban and 2021 Chevrolet Tahoe have debuted in Detroit sporting engineering, body, and tech enhancements from its tires to its top.

These are the major takeaways from the debut.

The redesign gives the Suburban and Tahoe class-leading interior space. 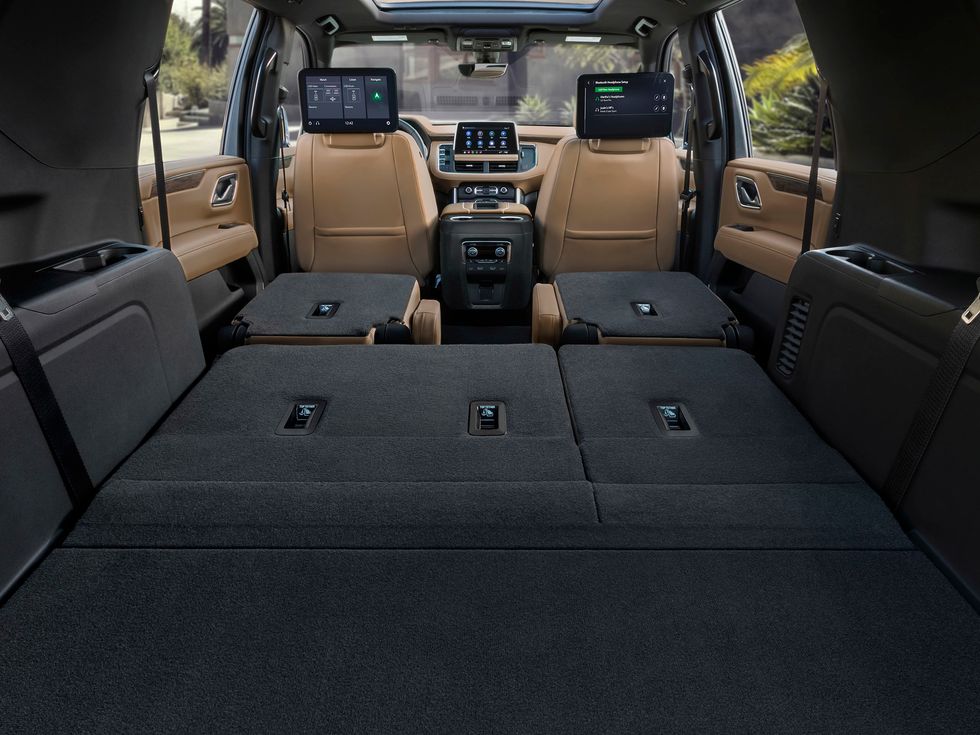 Chevrolet says that the SUVs' driving dynamics are greatly enhanced in this new generation. 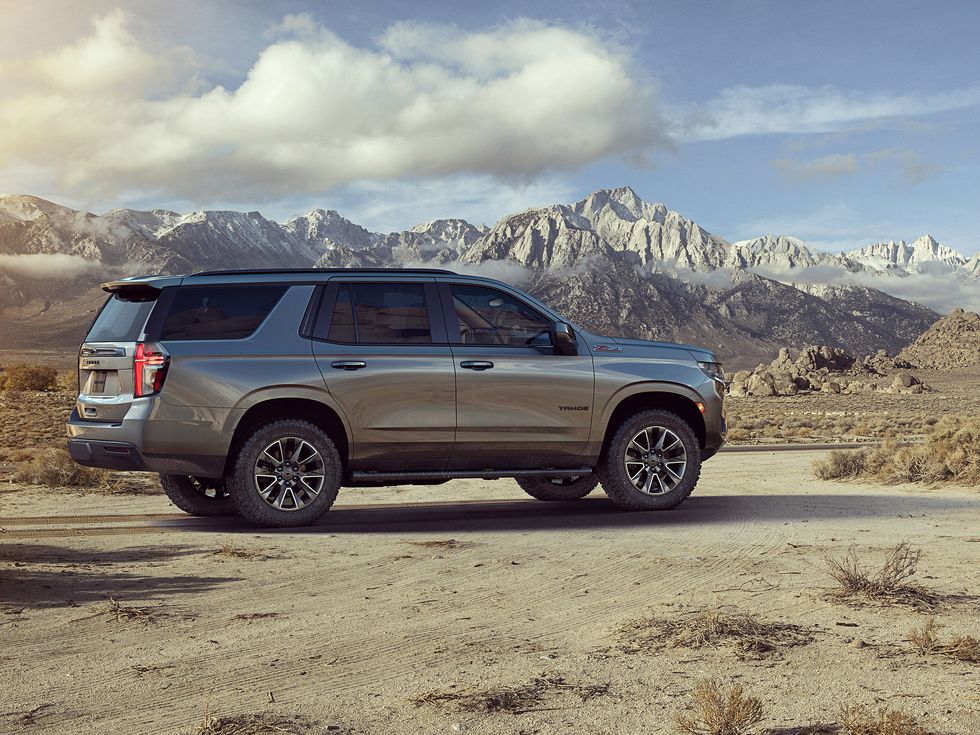 It isn't hard to believe given the ride and handling improvements from one generation to the next in the Silverado. All three vehicles share a platform. Chevrolet will offer the vehicles with Magnetic Ride Control and an Air Ride Adaptive Suspension. The new air suspension allows automatic leveling on all four corners of the vehicle and can adjust a vehicle's ride height by up to four inches. Above, the 2021 Chevrolet Tahoe Z71 hits the open trail.

​The models are filled with modern technology. 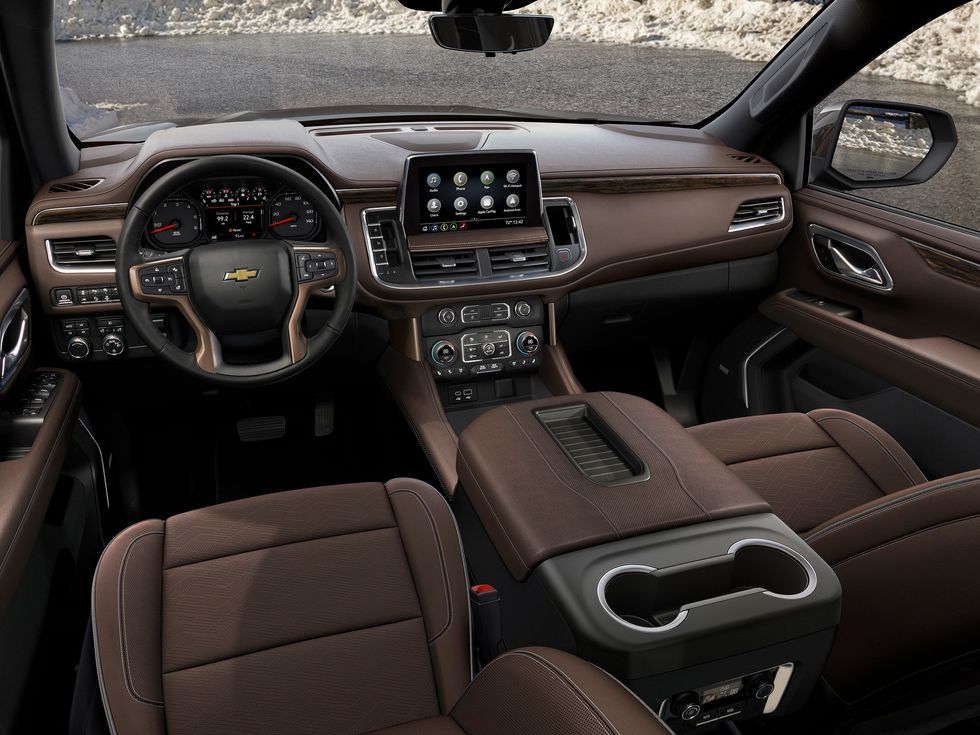 Above, the 2021 Chevrolet Suburban is shown with premium infotainment options.

Chevrolet has engineered the Suburban and Tahoe's engines to be powerful and efficient. 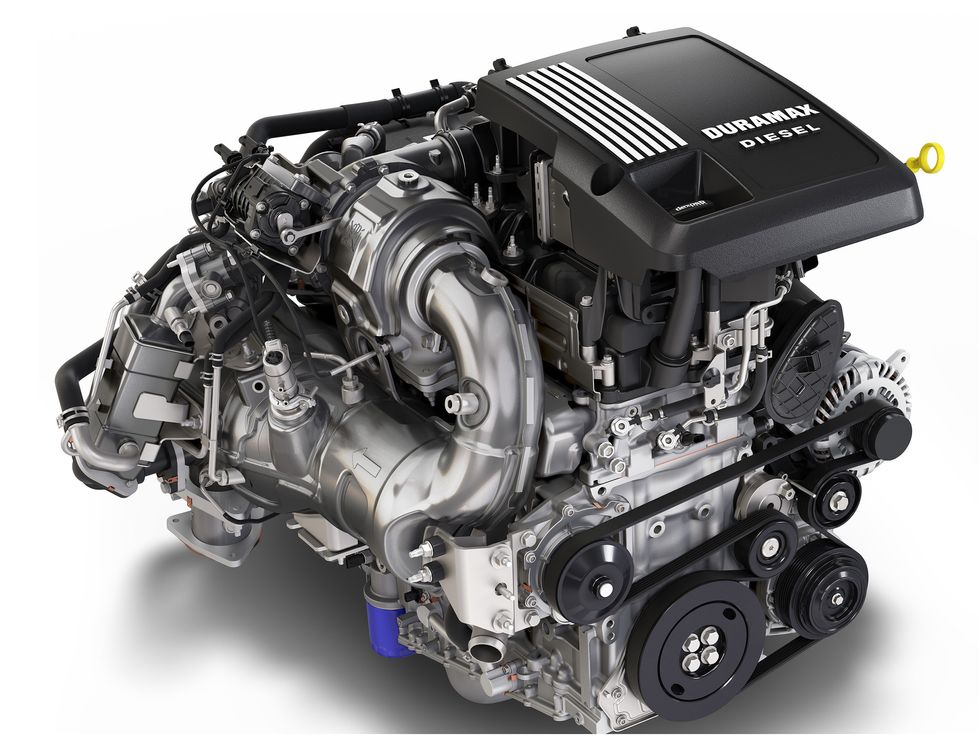 The automaker has updated its engine lineup to align with the Silverado's in this new generation. A 3.0-liter Duramax turbo-diesel and refined V8s are part of the menu. The engines are all paired with a standard 10-speed automatic transmission and push-button electronic shift.

The SUVs are meant for towing. 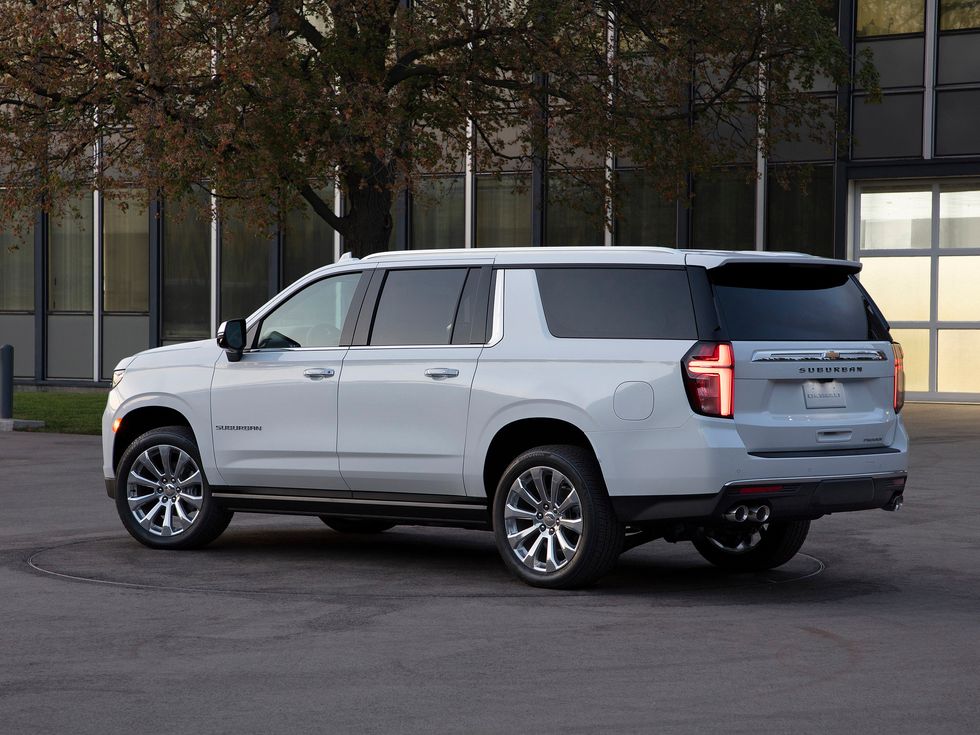 Chevrolet has given the new Tahoe and Suburban (shown above) trailering technology that first appeared in the new Silverado. A Max Trailering package is available and includes a high-capacity radiator and cooling fan, an integrated trailer brake controller, a Hitch Guidance with Hitch View feature, and the Chevrolet trailering app.

The Suburban and Tahoe will be offered in six trim levels. 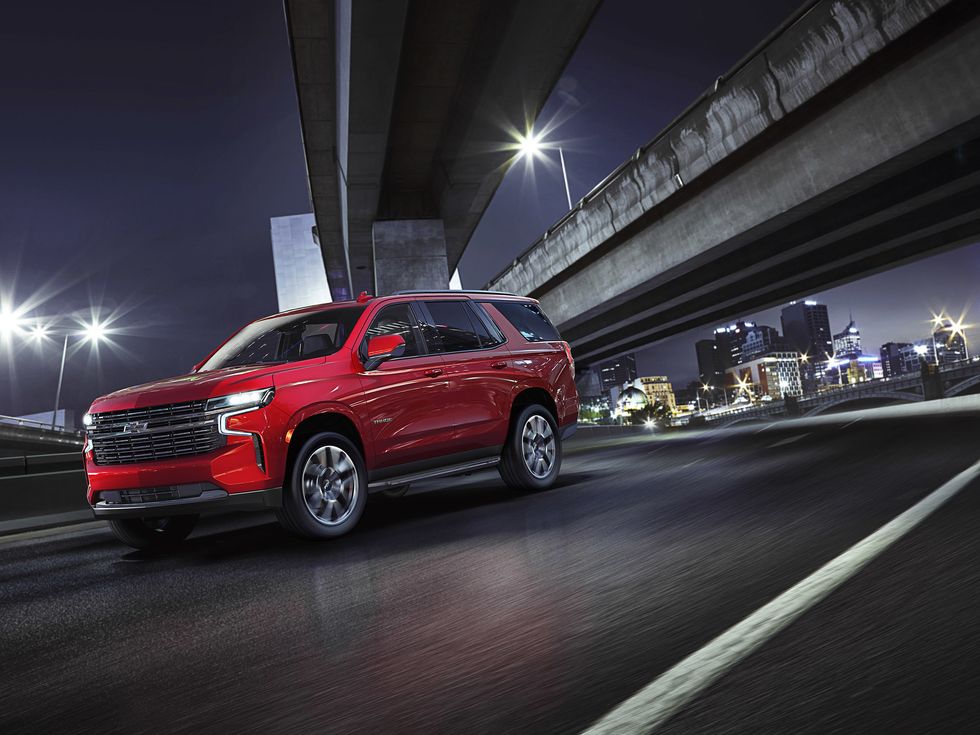 This is the 2021 Chevrolet Tahoe RST.

The Chevrolet Suburban and Tahoe (show above in the RST variant) will have the LS trim as their base model. Next up is the LT grade. Additional trim levels include:

The 2021 Suburban and Tahoe will be manufactured in Arlington, Texas and go on sale in mid-2020. 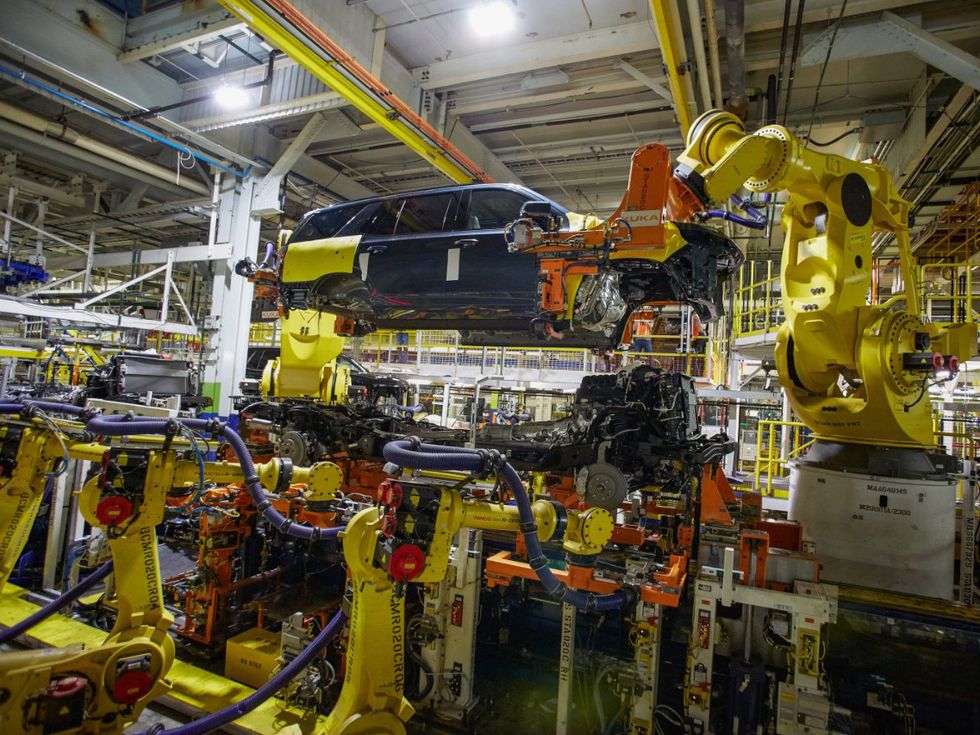 The Chevrolet Traverse looks different but still has what buyers are looking for. 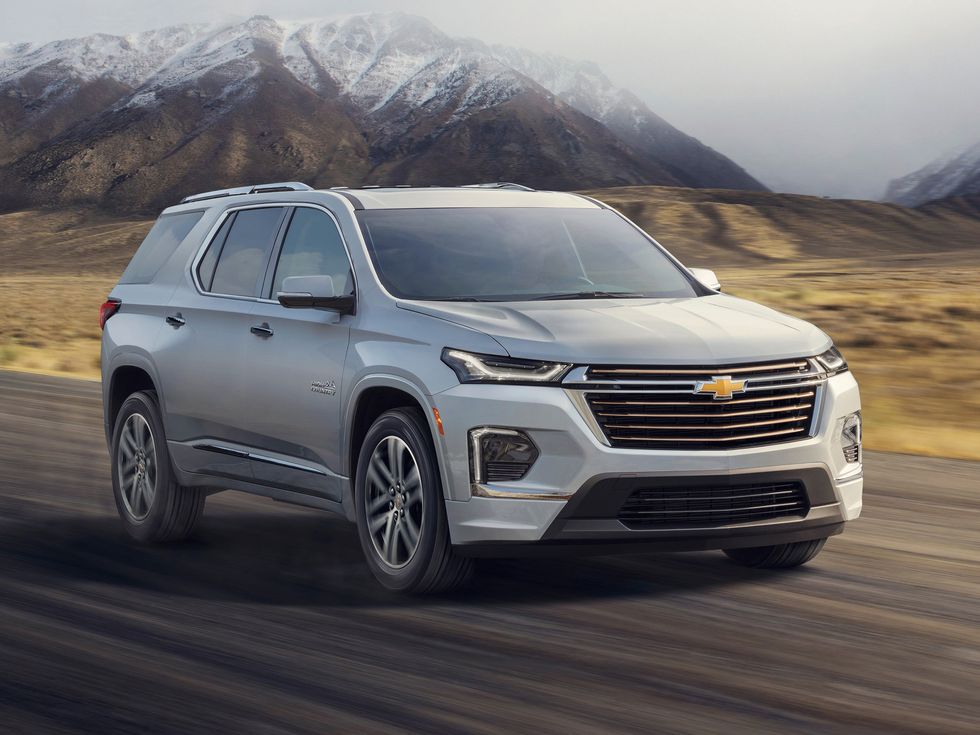 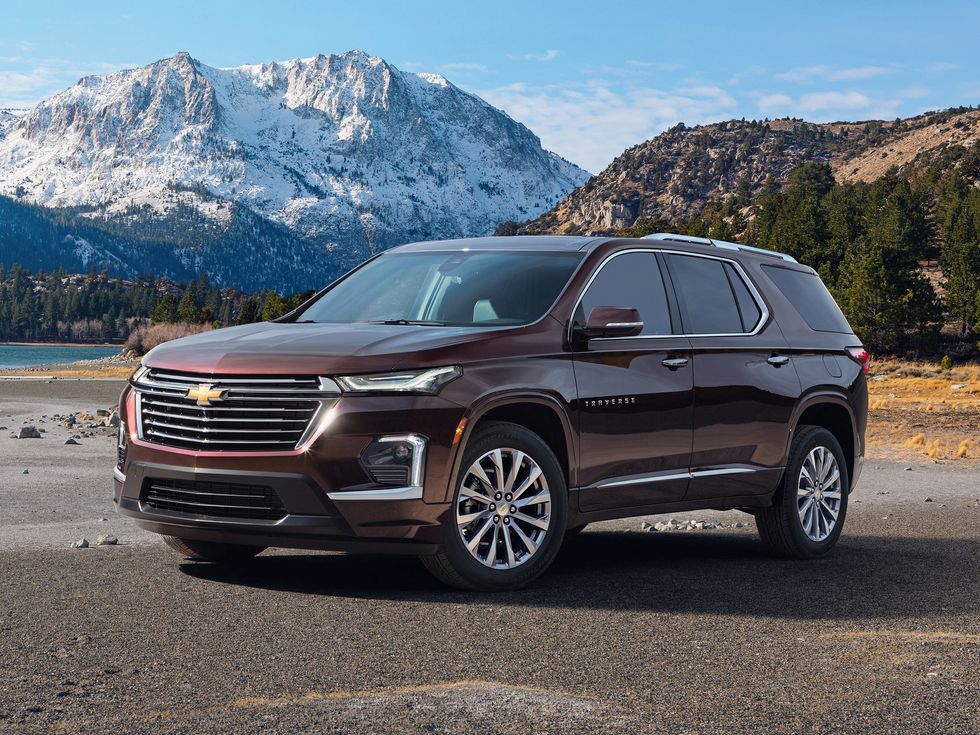 The 2021 Chevrolet Traverse will go on sale later this year. Pricing will be announced closer to the model's on-sale date, but don't expect too much of an increase over the previous model year.

Once, twice, three times it's out: The continuously discontinued life of the Chevrolet Impala

For much of its life the Chevrolet Impala was categorized as a large car.

The Chevrolet Impala has come and gone three times now. When the last model rolled off the assembly line at General Motors' Hamtramck plant this week, it marked the official end to the tenth generation of the legendary large car.

Before its sales dwindled in the late 2010s and sealed its fate, the Chevrolet Impala was one of the most popular sedans sold – at least in its early history. Starting with the 1958 model year, the Impala made a splash, coming to market as the top-tier version of the Chevy Bel Air. It was flashy with Corvette-like design cues and a longer body style than most of its competition. 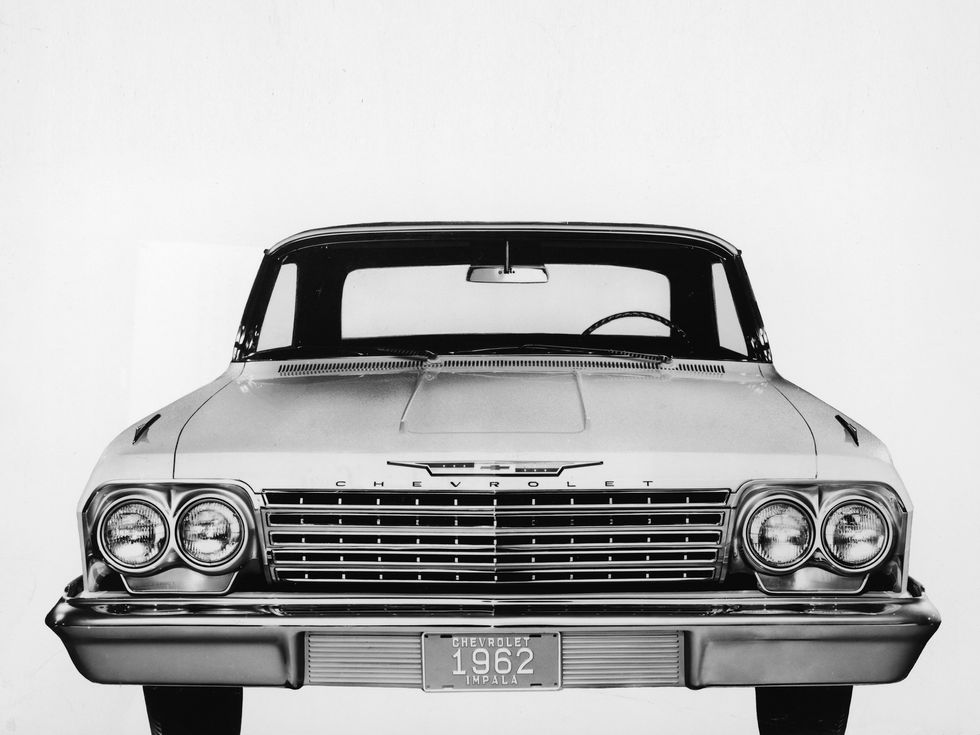 The 1962 Chevrolet Impala, shown in a press photograph from the time of its debut. Photo by Getty Images

This was the heyday of the big car and Chevrolet was 100 percent on-trend. 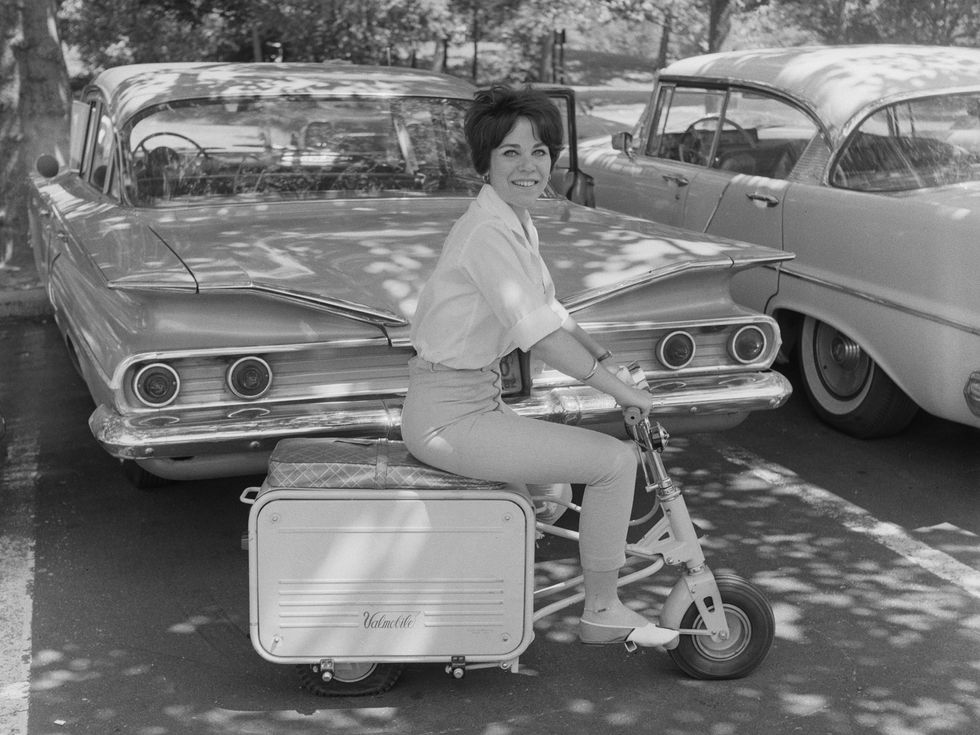 Fern Lynn demonstrating the Valmobile Suitcase Scooter New York State, 1962 behind a Chevrolet Impala. The Valmobile folds into a package the size of a suitcase and fits into a car boot. Photo by Getty Images

Between 1959 and 1960, the only two years that featured that second-generation Impala, Chevrolet sold 490,000 models. 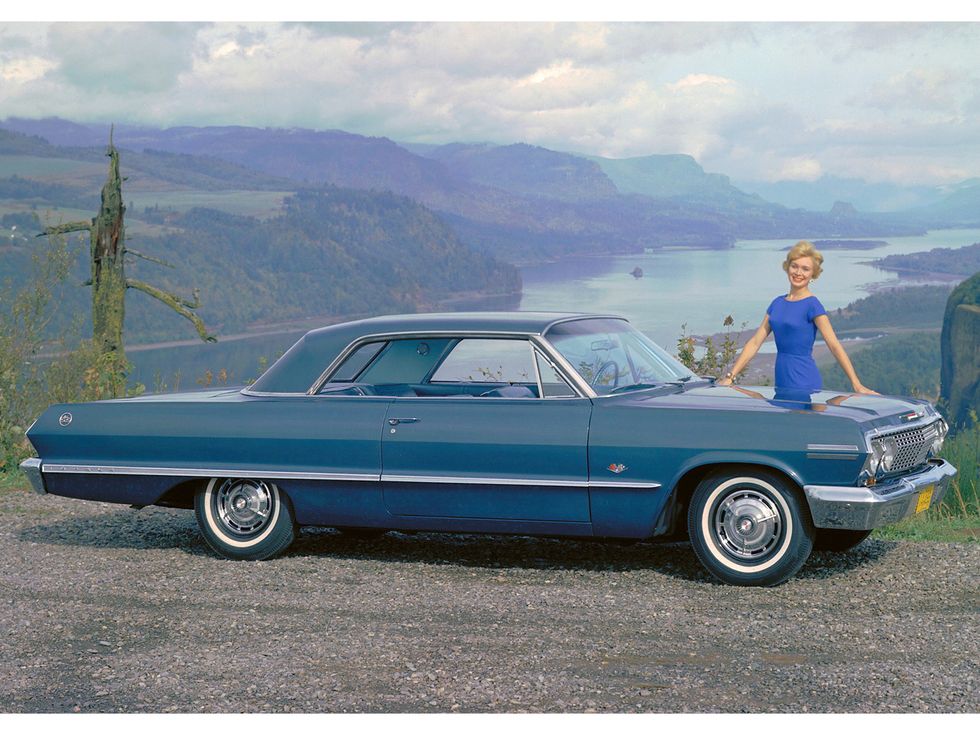 In 1961, the third generation of the Impala began when General Motors moved the model to the GM B full-size rear-wheel drive platform joining the Bel Air, Pontiac Bonneville, Oldsmobile Dynamic 88, and Buick LaSabre. Use of that platform by GM brands lasted from 1926 to 1996.

From there, the Impala had a rich history with families across the U.S. and beyond. As the 80s began, Chevy shifted the Impala to become their base level full-size car. The sedan was sold primarily as a fleet car during the first term of the Reagan administration until Chevrolet shelved it in 1985. 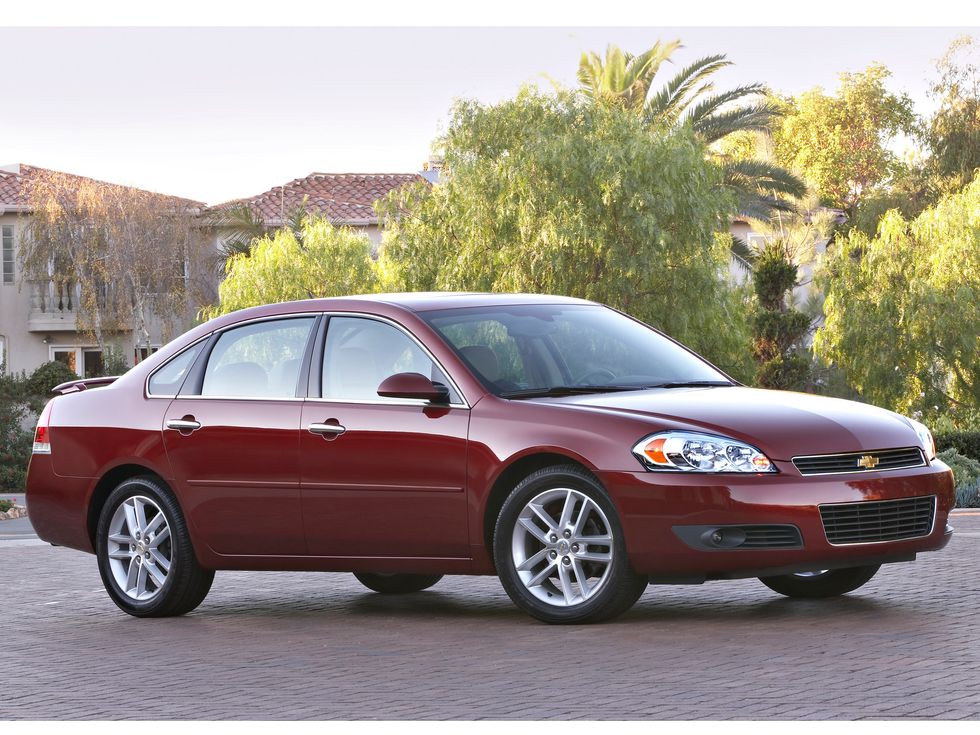 The Impala of the 90s was powered by a V6, not the traditional V8 of yesteryear.Photo courtesy of Chevrolet

In 1992, the Impala name was brought again as General Motors debuted the Impala SS as a concept car at the Detroit Auto Show. The model featured a body lower than the Caprice and an 8.2-liter engine.

Two years later, the 1994 Impala SS went into production with some design tweaks, including the engine, which was now shared with Corvette. And, just like that, Chevrolet discontinued the Impala again in 1996, this time to give the automaker more capacity to make more profitable SUVs. 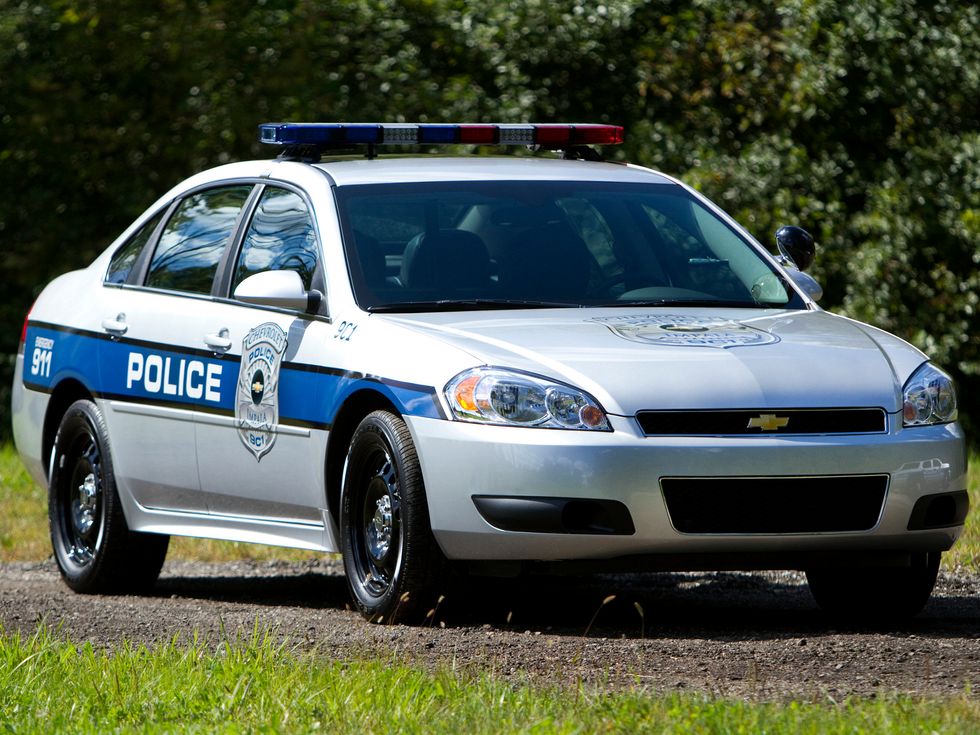 The Impala name was resurrected in 2000 to slap on the Chevrolet Lumina. With the rebadging, the Impala lost much of its previous identity. It was now a midsize car with a V6 engine. A supercharged Impala SS was sold starting in 2004, sharing its engine with the Buick Regal GS and the Pontiac Grand Prix.

In 2000, the vehicle also was released with a Police Package and an Underdover Police Package. With a stronger suspension and other interior changes from the mass market Impala, the model gained traction as a fleet vehicle.

Following a 2006 redesign, Chevy went back to its Impala roots a bit, giving the Impala SS a small-block V8 though the model was still a V8. It wasn't enough to convince buyers and the SS edition was shelved after the 2009 model year. 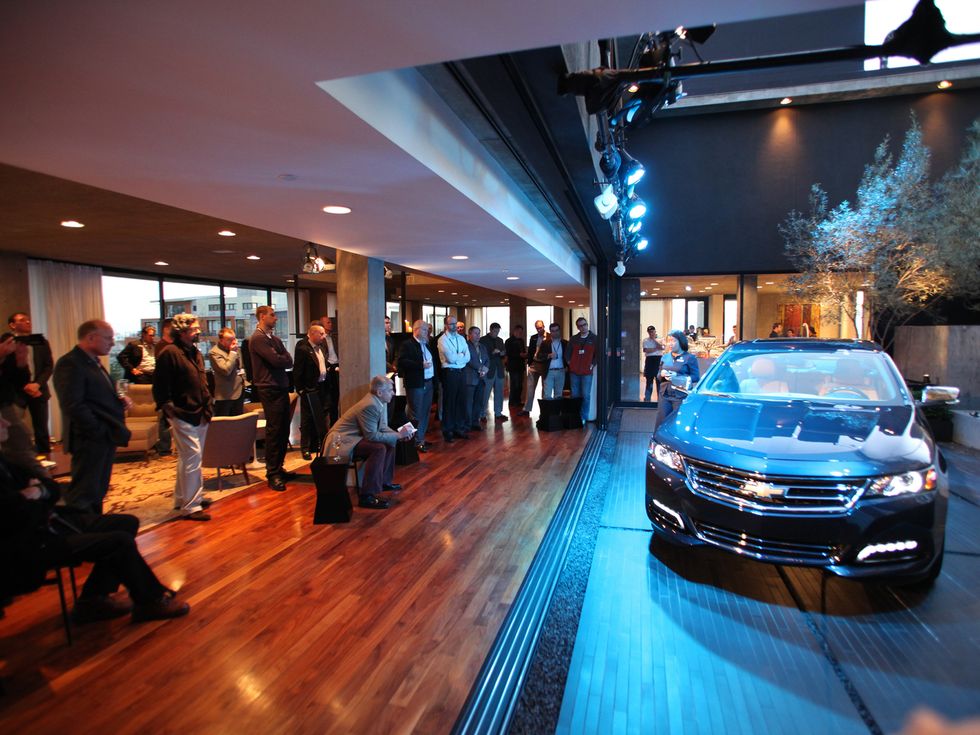 The 2014 Chevrolet Impala debuted at the New York International Auto Show in 2012.Photo courtesy of Chevrolet

Chevrolet went big with the 10th-genneration Impala, first showing it off at the 2012 New York International Auto Show. The model was bigger than the last iteration and it good reviews from noted publications. However, the praise was not enough to make the public purchase the car in the quantities they once had.

With the large car market sagging as demand shifted to SUVs and as the implementation of a General Motors business plan built on electrified mobility progressed, Chevrolet once again announced that the Impala program would end.

The final Chevrolet Impala rolled off the assembly line at the Detroit/Hamtramck plant on February 27, 2020.

General Motors has a habit of bringing old nameplates back (see: Hummer as the most recent example) so it may be too early to completely count the Impala out, though its days as a large sedan may be over for a while.