Hyundai Ioniq gets refresh for 2020, including more EV range

The Hyundai Ioniq has undergone a significant upgrade for the 2020 model year.

Hyundai's fuel-efficient Ioniq sedan is getting a long list of improvements for the 2020 model year, including a range boost for its EV model.

There are new front and rear fascias in all models. The cars' headlamps, taillights, and daytime running lamps have been upgraded. Ioniq has a new mesh-type grille in its plug-in hybrid (PHEV) and hybrid (HV) variants. The Ioniq Electric gets a new pattern on its closed grille. New sill and wheel designs round out the exterior enhancements. 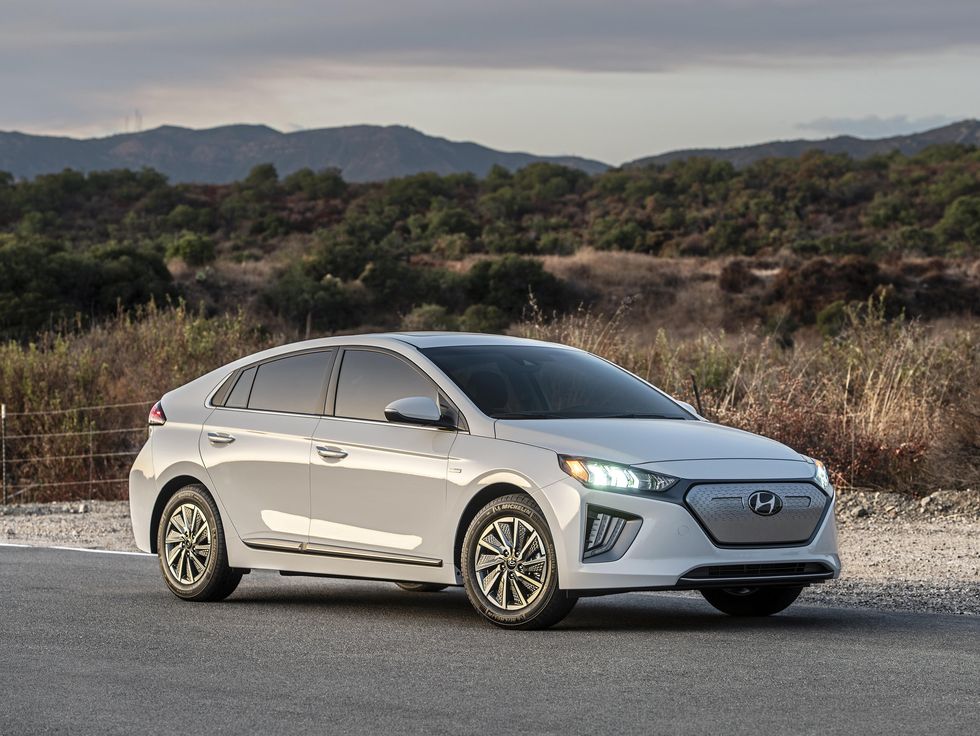 The Ioniq Electric has a unique grille.Photo courtesy of Hyundai Motor America

Sold in Ioniq Hybrid, Plug-in Hybrid and Electric variants, the model is the world's first car designed from the start to offer three electrified powertrains. Hyundai's Ioniq Hybrid gets an EPA-estimated 58 mpg combined. The Ioniq Electric model has a new 38.3-kWh battery that has 36 percent more capacity giving drivers 170 miles of all-electric range. This is up from 124 miles in the 2019 model. 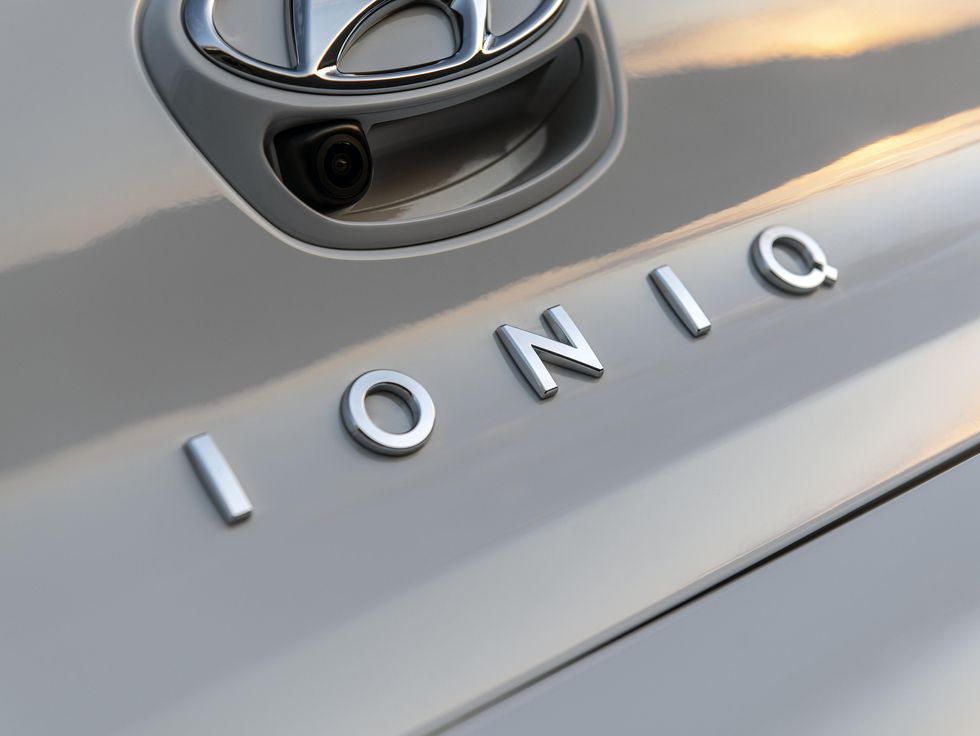 Hyundai hides the Ioniq's rearview camera below the company's badge on the trunk.Photo courtesy of Hyundai Motor America 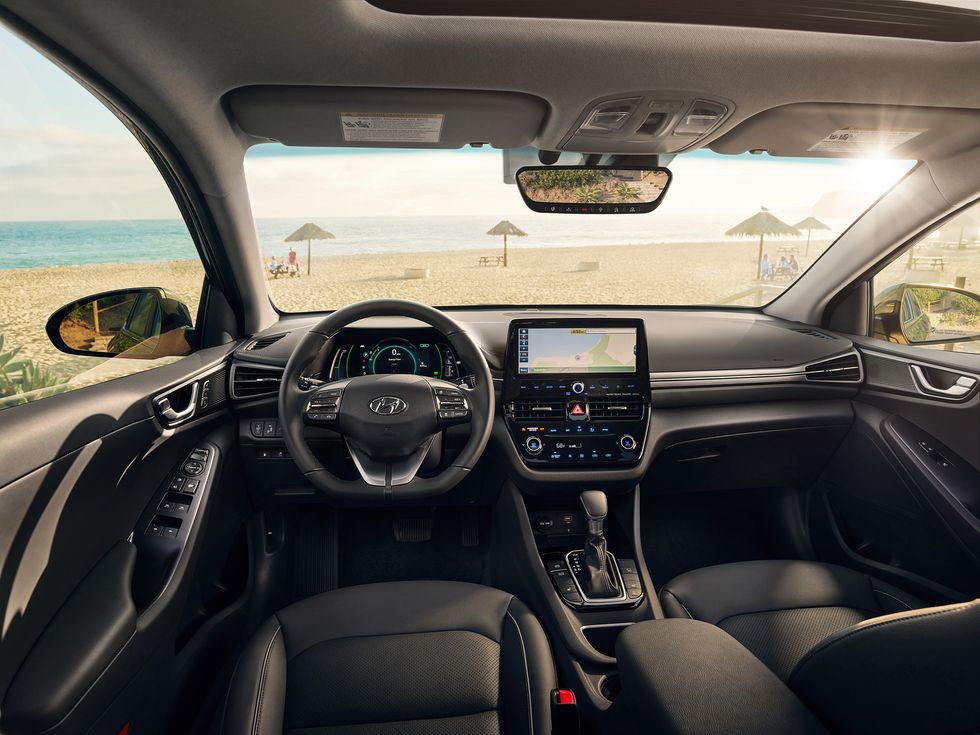 Buyers can now get the 2020 Ioniq with a 10.25-inch infotainment screen.Photo courtesy of Hyundai Motor America

Hyundai equips each model with a 10-year powertrain warranty. The Hyundai Lifetime Hybrid/Electric Battery Warranty ensures that if IONIQ's Hybrid/Electric lithium-ion-polymer battery ever needs replacement, Hyundai will replace the battery and cover recycling costs for the old battery pack free-of-charge to the original owner.

Hyundai has partnered with Hyundai to help spread the word about the power of hydrogen.

Hyundai Motor Company is convinced that the future of powertrains is hydrogen, not battery electric vehicles. To help promote their stance, and help others see that hydrogen is the way to go, Hyundai has enlisted the help of K-Pop supergroup BTS.

The company produced a five-minute film starring BTS and the pro-hydrogen messaging that made its world debut last night in Times Square one the billboard at the Marriott Marquis hotel. The film was screened recurrently for an hour between 7-8 p.m.

The film consisted of the seven members of BTS using hand-written messages to describe the beauty of Mother Nature and the importance of preserving and protecting the environment. Some of the imagery brought forth included forests, sky, snow, and waves.

That messaging was shown alongside the Hyundai Nexo, the automaker's hydrogen-powered SUV, which emits water vapor from its tailpipe instead of pollutants. The powertrain of hydrogen fuel cell powered vehicles don't require the level of highly pollutant mining that is required to produce battery electric vehicles like the Tesla Model X.

"With this captivating film, Hyundai Motor highlights its dedication to sustainable mobility and eco-friendly lifestyles," said Wonhong Cho, Executive Vice President and Chief Marketing Officer of Hyundai Motor. "We encourage our customers, fans and people around the world to take inspiration from the film to live in harmony with nature."

BTS had previously been named Hyundai Global Brand Ambassadors. As part of their ongoing partnership with the brand, they arrived at the Grammy Awards on January 26 in a Nexo. They've also starred in a campaign for the Hyundai Palisade.

The power of hydrogen has started to become more of a talking point within the automotive industry. Toyota is also a big proponent of the fuel and has promised to built a 145-acre prototype city that runs on the gas a the base of Mt. Fuji. The Japanese company recently debuted the second generation of their Mirai sedan, which runs exclusively on hydrogen power.

Starting February 26, seven different clips from the five-minute film – each featuring a BTS member and a special message about the environment – will be uploaded on Hyundai Motor's social media platforms: @hyundai.lifestyle for Instagram and @hyundaiworldwide for YouTube.

Until the end of April, fans can also upload their own pictures about protecting nature on their individual Instagram accounts with hashtags #MyCleanNature and #BecauseofYou, for a chance to win various offers and prizes. More information about the campaign is available on the company's website: www.hyundai.com/worldwide.

There have been four-, five, and six-speed transmissions. All the way up to 10-speeds. Now, there's the world's first predictive shifting technology that combines traditional transmission functionality with smart computing that takes into account road conditions and the flow of traffic to shit into the right gear. By optimizing gearing, vehicles can have improved fuel economy and less wear on a their mechanical elements including the brakes.

Called the Information and Communication Technology (ICT) Connected Shift System, the technology employs intelligent software in the Transmission Control Unit that collects and interprets real-time input from underlying technologies, including 3D navigation equipped with a precise map of the road as well as cameras and radar for smart cruise control. The automakers say that the 3D navigation input includes "elevation, gradient, curvature and a variety of road events as well as current traffic conditions. This occurs while radar detects the speed and distance between the vehicle and others, and a forward-looking camera provides lane information." 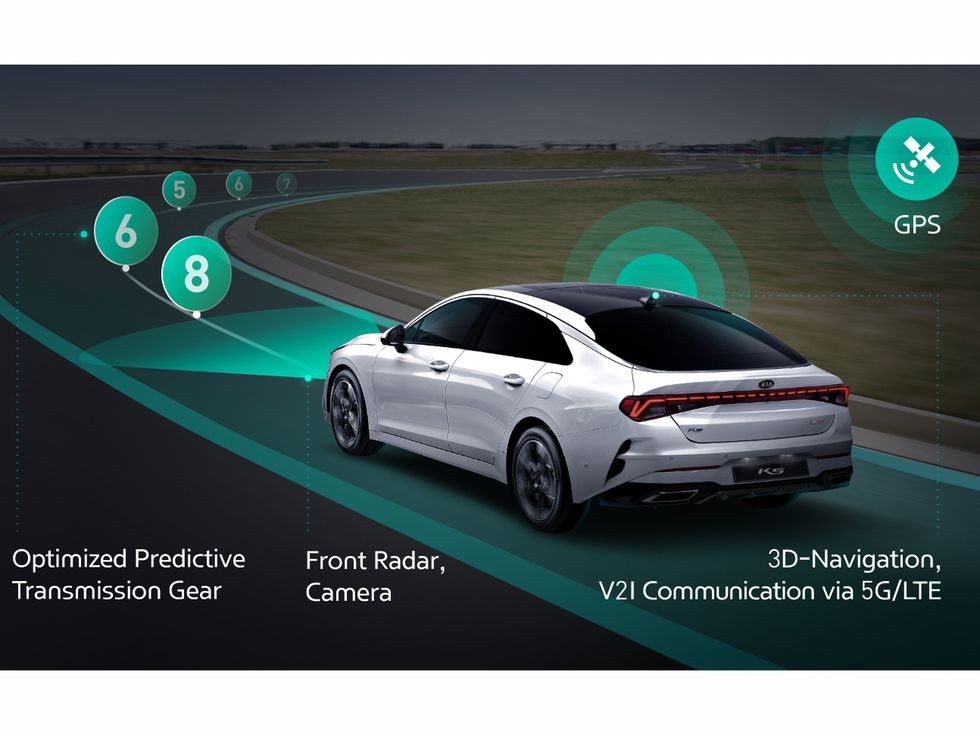 Using these inputs, the system uses an artificial intelligence algorithm and shifts the gears accordingly. During testing, on curved roads the frequency of shifting was reduced 43 percent compared to vehicles without the system. It also reduced the frequency of brake usage by 11 percent.

Engine brakes are applied when an accelerator pedal is released when speed bumps are ahead, when downhill slopes emerge, and when the speed limit changes.

Currently, many vehicles feature a variety of drive modes that adjust shifting, suspension, and acceleration. This system is the first use of that technology with intelligent learning.

During the system development, the companies filed around 40 patents in South Korea and abroad.

The ICT Connected Shift System is just a step in the automakers' intelligent transmission technology development. They're working to develop the intelligence for the system to work with LTE and 5G communication to interact with traffic signals. However, this technology faces a major obstacle for use in daily driver scenarios because of the heavy investment required by municipalities to adopt that level of technology.

"Vehicles are evolving beyond simple mobility devices into smart mobility solutions," said Byeong Wook Jeon, Head of Intelligent Drivetrain Control Research Lab. "Even a traditional area of the automobile, such as the powertrain, is becoming a high-tech technology optimized for smart mobility through efforts to integrate ICT and artificial intelligence technologies."

The ICT Connected Shift System has not yet deployed to vehicles but the companies are planning to advance it in that direction as the technology evolves.