The new Audi E-Tron Sportback made its debut at the Los Angeles Auto Show last week.

Photo courtesy of Audi AG
Audi has given the public a peek at an electric SUV, sports car, and a crossover, with promises of an all-electric-focused future on the tips of executives' tongues. At the Los Angeles Auto Show, Audi took one step closer to its vision with the debut of the 2020 Audi E-Tron Sportback.

The car is a four-door crossover with fastback-like styling similar to what you'll find in the BMW X6 and Mercedes-Benz GLE Coupe. Its dimensions are similar to the Audi E-Tron, but it sits lower and its roof slopes at a steeper angle. Exterior design cements the vehicle's positioning as an Audi and as an electric vehicle with many of the design hallmarks of the larger E-Tron SUV carried over into this new model. 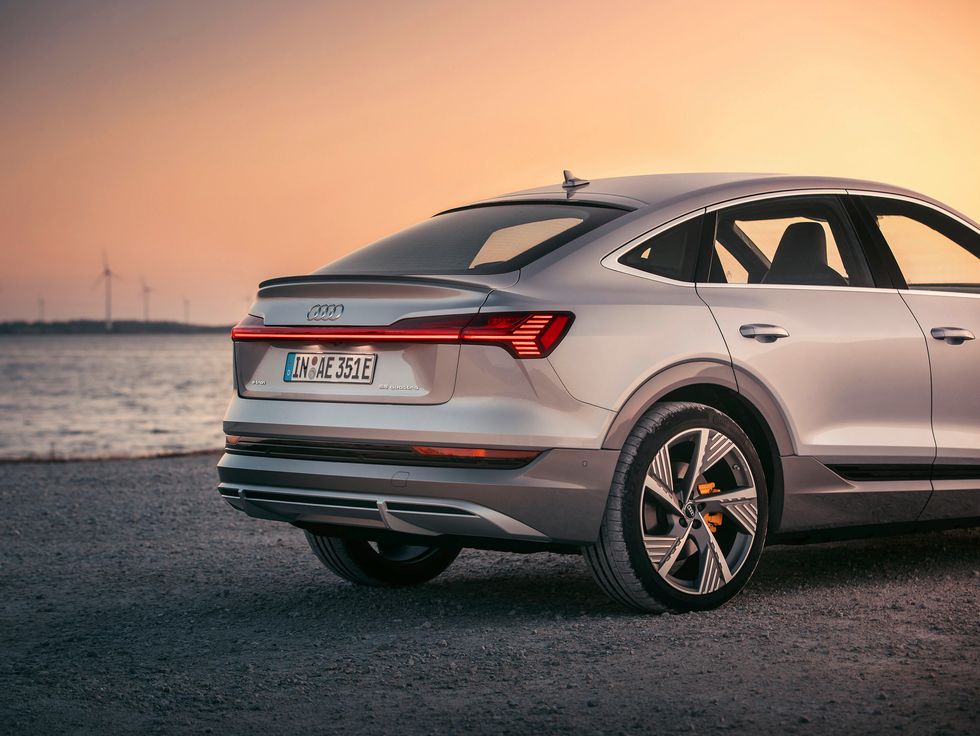 The model is available in 13 different paint jobs including new plasma blue metallic, which is exclusive to the crossover. 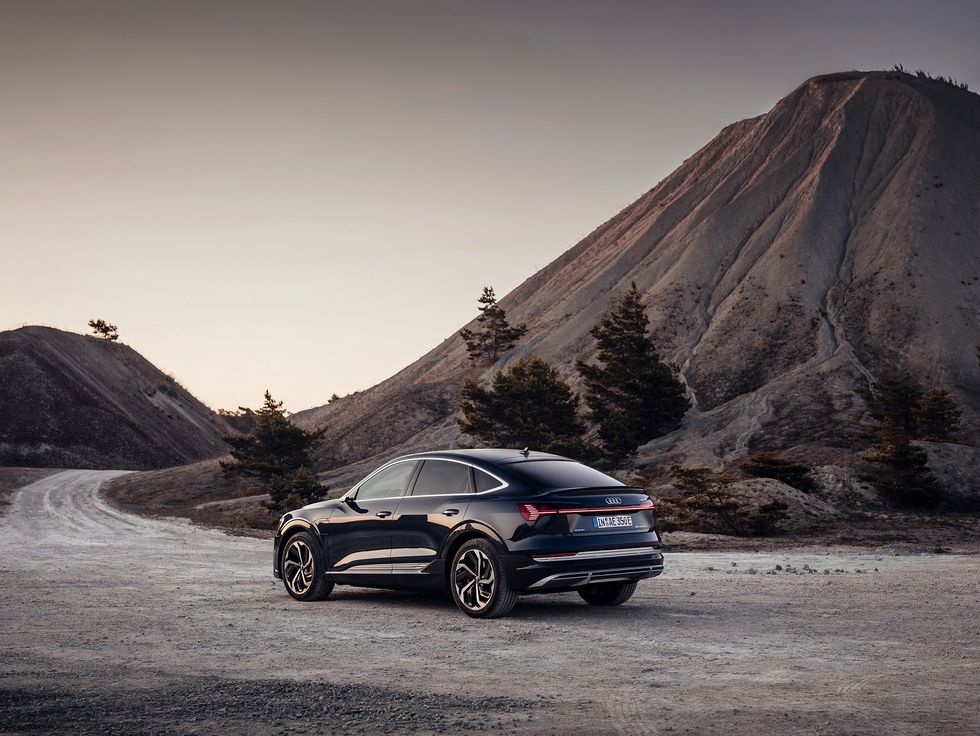 The crossover is sleek but maintains the porportions of the E-Tron SUV.Photo courtesy of Audi AG

Only the E-Tron Sportback 55 Quattro will be sold in the U.S. That model has 413 lb-ft of torque that it gets from two electric motors, one attached to each axle. Using Sport mode, drivers can enjoy a brief burst of 489 pound-feet of torque to help get them off the line in a jiffy. Audi claims a zero to 62 mph time of 5.7 seconds. Its top speed is limited to 124 mph.

Audi has engineered the model to have 50:50 weight distribution, which is ideal for any vehicle. It rides on standard standard 255/55 R19 size tires. Up to 22-inch wheels are available. 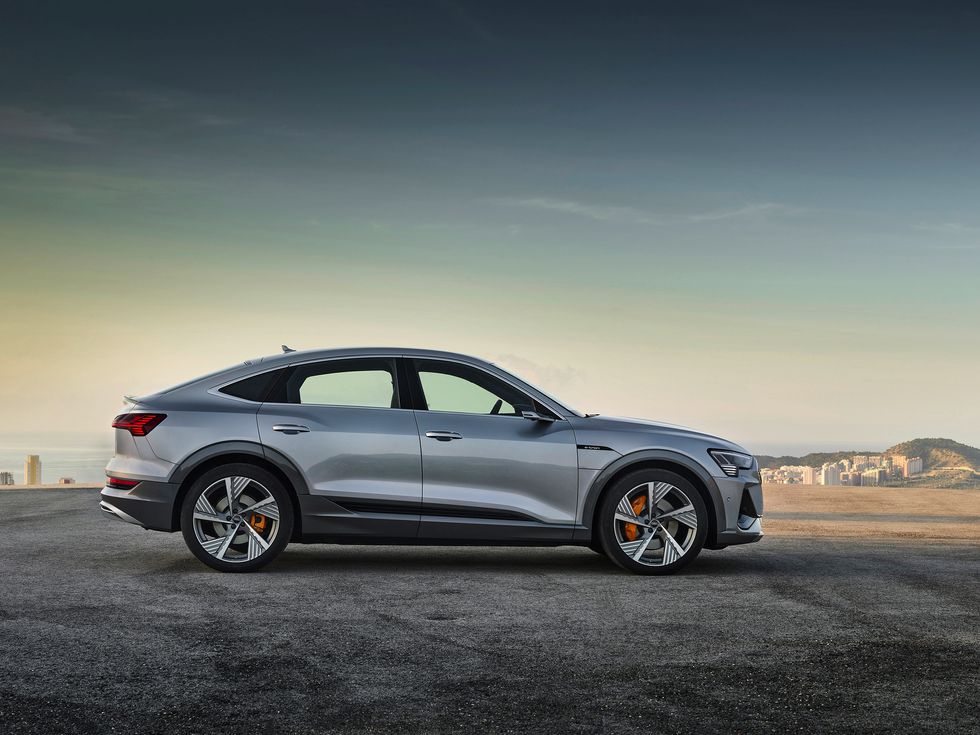 Because of slight design differences, the model is more fuel efficient than the E-Tron SUV.Photo courtesy of Audi AG

The new crossover has a 277-mile range in European testing thanks to its 95 kWh battery, but EPA estimates are expected to lower that by about 60 in for U.S. customers. The SUV can be charged up to 80 percent in under an hour at a 150-kW fast-charging station.

Most of the car's interior is identical to the Audi E-Tron SUV. Some of the fancier technology, like matrix LED headlights and cameras instead of side mirrors won't be coming to the U.S. due to government regulation. 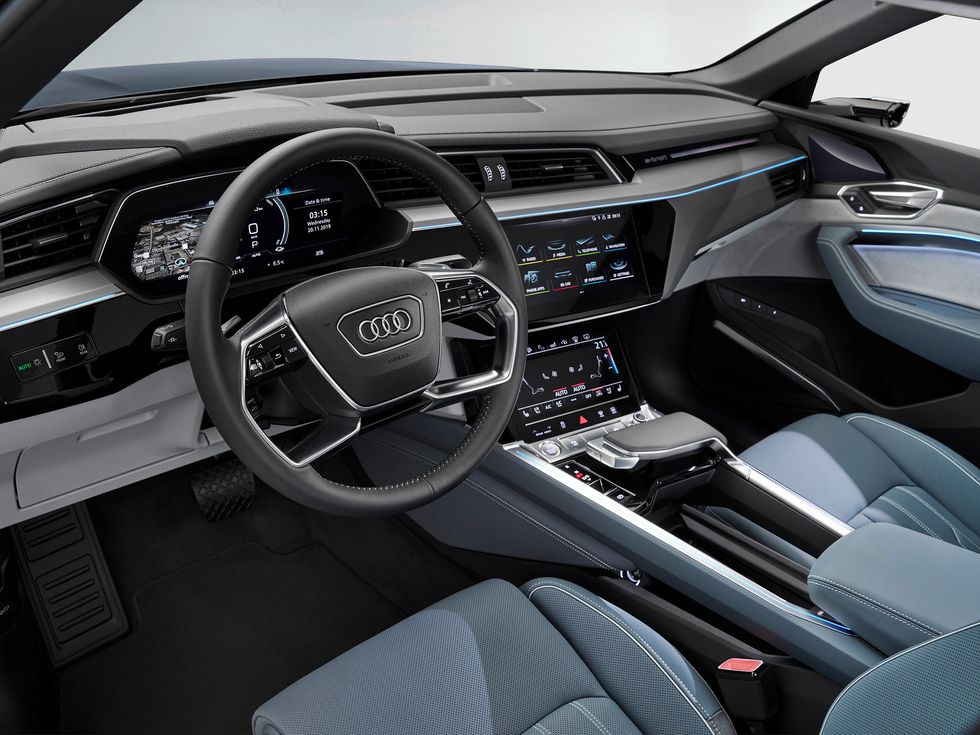 The car does have some nifty tech like dual screens in the center console that control infotainment and climate controls. The top screen is 12.1 inches and the lower is 8.6 inches. Audi virtual cockpit is standard and features a 12.3-inch screen in front of the driver.

Despite the car's fastback shape, headroom in the rear seats is diminished by on 20 mm in the new model compared to the E-Tron SUV.

The Audi e-tron Sportback can be ordered as of the end of November. It will arrive at European dealerships in the spring and reach the U.S. later.

The RS Q3 is Audi's most performance-focused variant of its subcompact SUV.

The spunky 400-horsepower Audi RS Q3 is not coming to the U.S. according to a report by CarBuzz. Mark Dahncke, Director, Communications, Audi of America, confirmed the news to the outlet.

The move isn't unprecedented. Though growing in popularity stateside, the automaker doesn't bring all of its sportiest variants to the U.S. market. Audi has only recently began opening the floodgates with the announcement that the U.S. will get the RS Q8, SQ7, and SQ8. 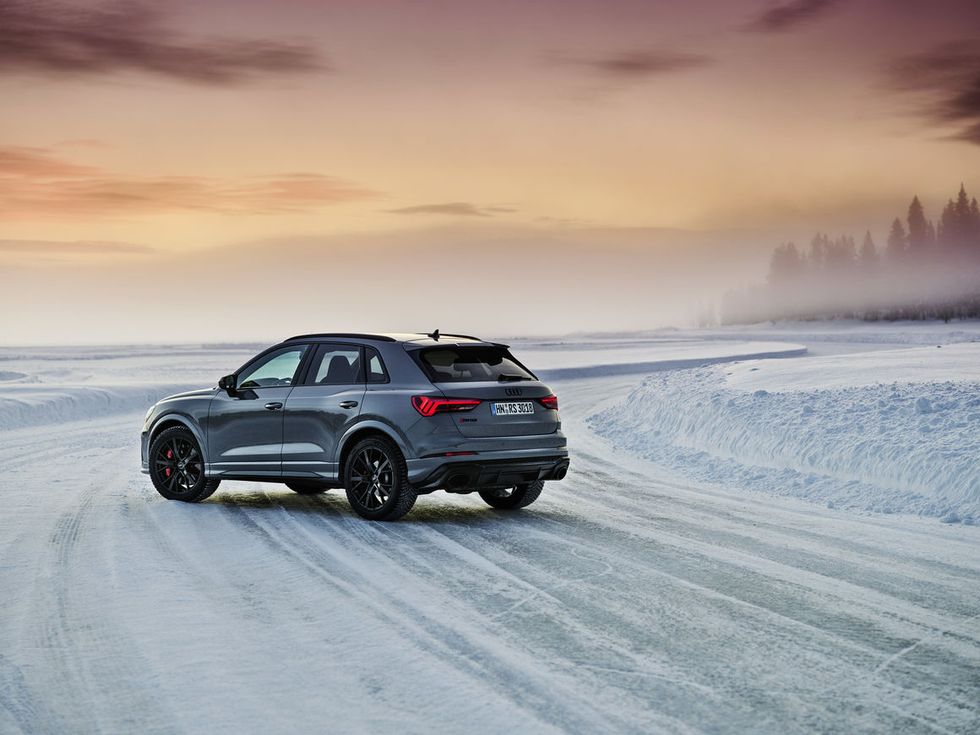 The car can pack a punch, but isn't slated to be sold in the U.S.Photo courtesy of Audi AG

Unlike in Europe, there are none true sport versos of subcompact SUVs sold in the U.S. Dahncke pointed to a lack of demand for that style vehicle when talking with CarBuzz.

A big part of that argument is cost. Bringing a RS Q3 to the U.S. could make its MSRP around $55,000. That price tag is generally reserved for much larger SUVs in the land of the free whose residents are known for preferring larger vehicles than Europeans.

Here's what Americans are missing out on.

The RS Q3 has an inline 2.5-liter five-cylinder engine user the hood that powers its subcompact body. At its peak it reaches 354 pound-feet of torque. The engine is paired with a seven-speed dual-clutch transmission and comes standard with all-wheel-drive. The SUV can get to 62 mph from a standstill in 4.5 seconds with a top speed of 155 mph.

Audi has equipped the model with McPherson struts up front, a four-link rear suspension, and a dual-circuit brake system.

Audi has added a new entry level Q7 choice for the 2020 model year.

When your consumer research tells you that you need a cheaper version of your three-row SUV in order to get more customers, you make a new base model. Meet the fresh 2020 Audi Q7 45. This move is on the heels of a model refresh for 2020 and the introduction of the SQ7 model.

Like its more powerful stablemates, the Q7 45 features a large, octagonal Singleframe grille. It also has standard LED headlights and taillights, as well as standard 19-inch five-arm design wheels wrapped in all-season tires. Audi will sell the model with available 20-inchers that wear similar shoes.

The new luxury SUV is less powerful than other Q7 models. It's powered by a turbocharged 2.0-liter four-cylinder engine that is paired with an eight-speed automatic transmission. The powertrain achieves 248 horsepower and 273 pound-feet of torque and can accelerate from 0-60 mph in 6.9 seconds.

A tow package is available. Checking that option box makes the Q7 45 capable of twig up to 4,400 pounds.

Despite being a new entry level model, Audi has not downgraded the SUV's infotainment system, which features an intuitive dual-screen (10.6-inch upper ad 8.6-inch lower) infotainment and climate control system. Apple CarPlay and Android Auto compatibility is standard, as is Audi virtual cockpit.

Tri-zone automatic climate control is standard while quad-zone and a panoramic sunroof are available.

The model comes with a long list of standard and available safety technologies including adaptive cruise assist with traffic jam and turn assist and, Audi side assist with rear cross-traffic assist and vehicle exit warning, and top view camera system with virtual 360 surround view.